"With Art, Investing in Genius" @nytimes by JAMES B. STEWART 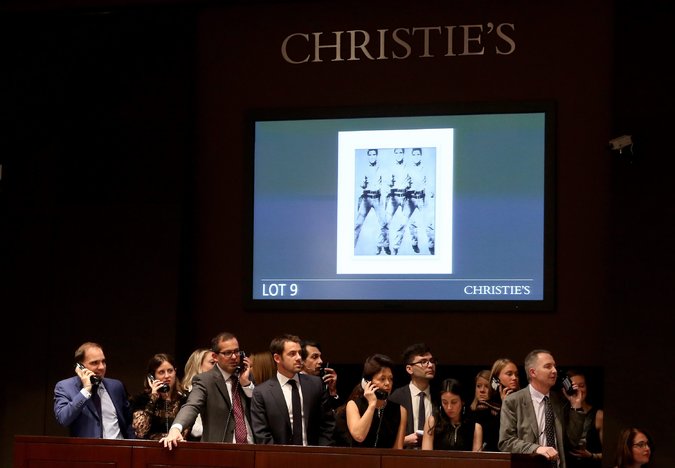 Andy Warhol’s “Triple Elvis (Ferus Type)” sold for nearly $82 million this month. It is from the ’60s, his most sought-after period. Credit Andrew Gombert/European Pressphoto Agency

If there were any remaining doubts that “making money is art,” as Andy Warhol famously pronounced in his 1975 book, “The Philosophy of Andy Warhol,” they were surely vanquished on Nov. 12. His silk-screen print “Triple Elvis (Ferus Type),” an image taken from a Hollywood studio publicity shot showing Elvis Presley with a gun, sold for nearly $82 million at a Christie’s auction packed with bankers, hedge fund managers and art dealers.

In just two weeks this month in New York, the auction houses Sotheby’s and Christie’s sold over $2 billion in art, a record for major New York fall auctions. The billionaire investor Steven A. Cohen paid over $100 million for a Giacometti sculpture. A Manet sold for $65 million, two by Mark Rothko for $45 million and nearly $40 million, a Georgia O’Keeffe for $44 million and a small Jasper Johns American flag for $36 million. 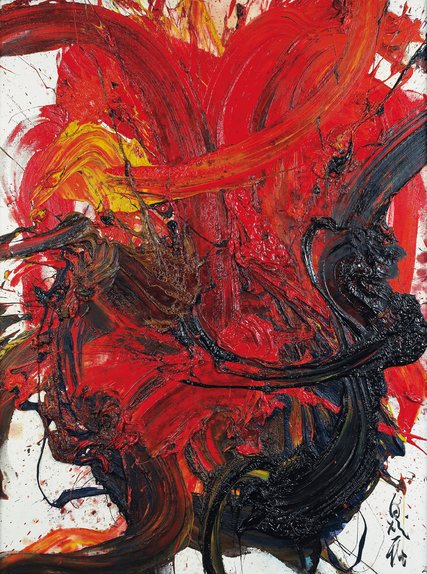 Kazuo Shiraga’s “BB56.” The artist is obscure, but his work is innovative and influential. Credit Christie's

For better or worse, fine art is now firmly planted alongside equities, bonds, commodities and real estate as an asset class. Financial terms like “compounded rates of return” have elbowed their way into the traditional vocabulary of connoisseurship even as art’s old guard has trouble with the word “sell.” (“Deacquisition” is preferred.)

This month’s record sales left some dealers and collectors talking about irrational exuberance and a potential bubble, especially in the soaring contemporary-art market. But Evan Beard, who leads Deloitte’s art and finance practice in the United States, said he didn’t agree. “If you were seeing second-rate works selling for huge values, then you’d say there’s dumb money out there,” he said. “But the works selling for these high multiples are important works that art historians have deemed innovative and have had influence. People want to own original works of genius.”

Mr. Moses said that it was hard to describe the art market as exuberant, when overall returns — about 3.5 percent annually — have barely outpaced inflation and have trailed equities and, in recent years, even fixed income. He noted that it was contemporary and postwar works that had shown the biggest gains. “The single most surprising change in the art market is the relative increase in the value of recent art,” said David Galenson, a professor of economics at the University of Chicago who has done groundbreaking research into valuations in the art market.

While some art historians, curators and dealers bemoan the emergence of fine art as just another economic asset class, “art and money have always been joined by an umbilical cord of gold,” Professor Galenson said. “The Renaissance ideal has gone the way of the dodo bird. I say, Get over it. Steven Cohen doesn’t make any pretense of being an art history major. Maybe he’s the Andy Warhol of collectors.”

In a recent survey of art professionals by Deloitte, 76 percent said collectors viewed art, at least in part, as an investment — up from 53 percent two years ago. And 72 percent said their clients’ primary reason for buying art was related to the “social and networking scene” and the status associated with buying art, compared with 59 percent in 2012.

Given the money involved, it probably shouldn’t be surprising that bankers are treating art like any other asset class, which, in turn, is helping drive up prices and create a more liquid market. More banks are lending against art as collateral. Some are even starting to create collateralized debt obligations with art as the underlying asset — much as bankers packaged subprime mortgages before the financial crisis.

John Arena, senior credit executive for fine art at U.S. Trust, said the bank had a long track record in art lending and had billions outstanding in loans guaranteed by art. “Contemporary and postwar art is the driving force,” he said. “The trajectory has gotten steeper, and the loan requests have gotten much higher. In contemporary art, you’re dealing with a younger generation of collectors, who are comfortable with the economic aspects of their art. They’re leveraging it and using it to take advantage of other investment opportunities, while still being able to enjoy it and keep it on their walls.”

He said U.S. Trust would lend up to 50 percent of a work’s appraised value but that it wasn’t packaging the loans into C.D.O.s. “I’ve heard people are doing that,” he said. “But it scares me. That’s not our game.”

The soaring prices are being driven by market forces rather than any aesthetic or artistic awakening, Professor Galenson said. “Aesthetics have nothing to do with it.”

What does matter, Professor Galenson’s research suggests, is innovation by the artist. “It’s really incredibly simple,” he said. “Valuable paintings are innovative. Valuable artists are innovators. Cézanne did his most influential work at the very end of his career, Picasso at the very beginning, when he invented Cubism. Nineteen sixty-two is when Warhol started using mechanical reproductions and photography and reinvented modern art. His works from the 1960s are the very most expensive. Those from the 1980s are much less.”

Mr. Beard, of Deloitte, said he found Professor Galenson’s research persuasive. “That you saw the ‘Triple Elvis’ sell for so much has nothing to do with its aesthetic value or coolness or hipness and everything to do with the fact that historians agree that Warhol with this work influenced art history,” he said.

In this respect, the auction catalog may be more important to a work’s value than the art itself. Monet’s portrait of Alice Hoschedé may be very beautiful, but its sales price of $33.8 million represents a compounded rate of return of just 5.4 percent since its last sale, according to Mr. Moses. And for Impressionist and modern works as a whole, the average was only 3.9 percent.

By comparison, consider the work of the Japanese artist Kazuo Shiraga, who died in 2008 after becoming a Buddhist monk. Mr. Shiraga is hardly a household name, and he didn’t figure in the headlines from this month’s sales. But his “BB56” sold for $4.9 million, which represents the single best compounded rate of return — 53 percent — of any work sold this month, according to Mr. Moses’ calculations. (The work last sold at auction in 2008 for a little over $300,000.)

The description of the work from Christie’s catalog hits all of Professor Galenson’s benchmarks.

It’s innovative: “Painted directly with the artist’s feet as he suspended himself above the canvas from a rope hanging from the ceiling, the painting represents a unity of the central tenets of postwar abstraction with performance art.”

And it’s from the most influential period of the artist’s work: “Painted in 1961, ‘BB56’ dates from a highly significant time for the artist,” the catalog description says, adding that 1962 “was the year in which Shiraga was given his first solo show outside Japan, at the Galerie Stadler in Paris, where this painting was exhibited.”

That it may look, to some, like a child’s finger painting is irrelevant. “A lot of contemporary art is aggressively ugly,” Professor Galenson said. “That doesn’t matter in terms of its value.”