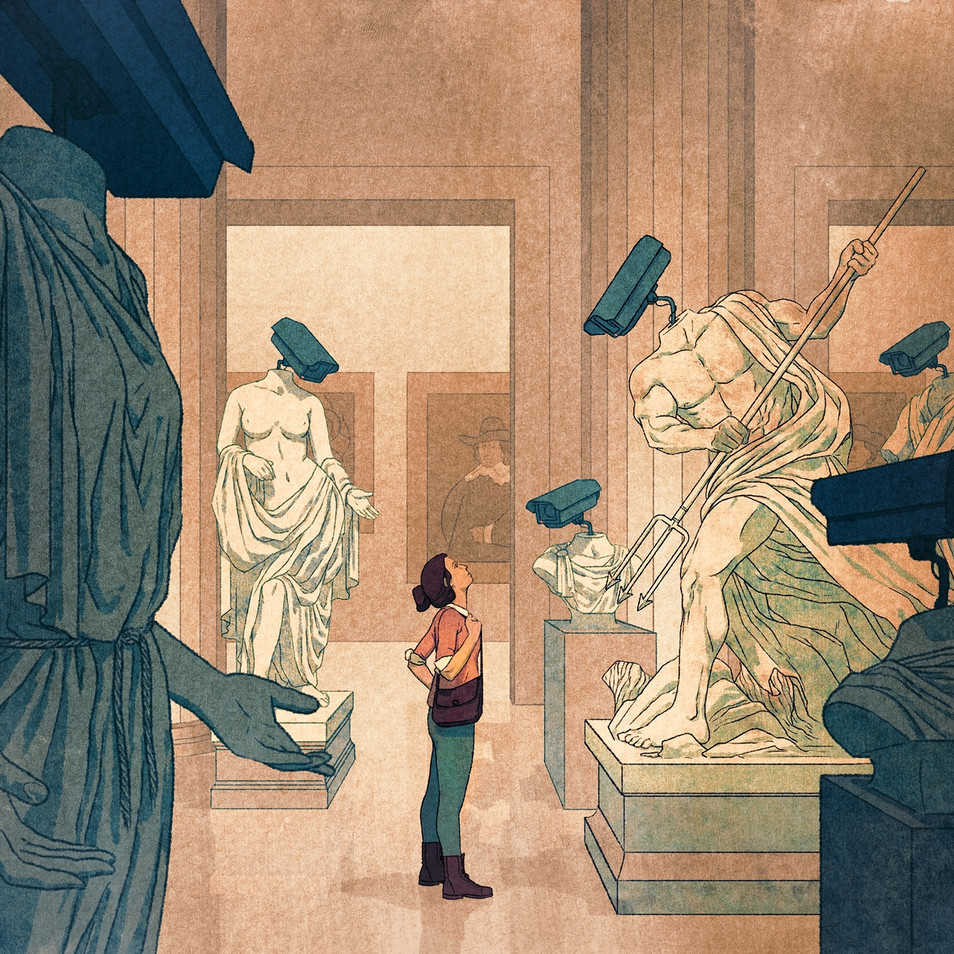 One morning last week, a team of experts at New York’s Solomon R. Guggenheim Museum searched for hidden spots in the rotunda to conceal tiny electronic transmitters. The devices will enable the museum to send messages about artworks to visitors via their smartphones while at the same time collect details about the comings and goings of those guests.

At today’s museums, all eyes aren’t just on the art. They’re on the visitors.

Across the country, museums are mining increasingly detailed layers of information about their guests, employing some of the same strategies that companies like Macy’s, Netflix and Wal-Mart have used in recent years to boost sales by tracking customer behavior. Museums are using the visitor data to inform decisions on everything from exhibit design to donor outreach to gift-shop marketing strategies.

At the Dallas Museum of Art, a frequent-visitor program asks guests to check in at spots around the building via their phones or on kiosks. By doing so, members win points toward rewards, like free parking, special-exhibition tickets or private use of the museum’s movie theater. The museum then filters the data to better understand guests’ behavior, like how often they visit, which shows they flock to and what art they ignore. 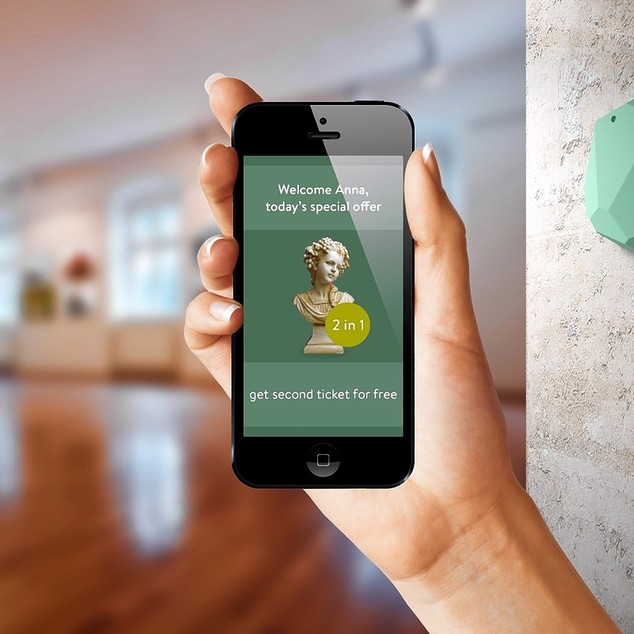 ENLARGE
An Estimote Beacon transmits to a smartphone Estimote

The Minneapolis Institute of Arts analyzes data from tens of thousands of visitor surveys to help make certain curatorial decisions. If the numbers indicate people aren’t so interested in a coming show, it might be reworked, postponed or moved to a smaller gallery. “It’s really a culture shift in museums for the curators to pay attention not just to what’s significant art historically, but also what’s perhaps on trend,” says Kristin Prestegaard, the museum’s chief engagement officer.

The moves have some critics questioning whether the “Big Data” revolution that is transforming American corporations has a place in the nonprofit arts world.

“When you’re looking at the art, you don’t want the art looking back at you,” said Marc Rotenberg, a Georgetown University law professor who heads the Electronic Privacy Information Center, a privacy research group. “It’s not as if people going out of museums say, ‘Jeez, I wish that museum knew a lot more about me, I would’ve had a lot better experience.’ It’s being driven by the possibility of increased sales, advertising and better marketing.”

As museums collect more personal information from their guests, privacy advocates warn, they’re opening themselves up to the same kinds of security breaches and potential lawsuits that have roiled companies like Home Depot and eBay. And with data-mining tools able to calculate a show’s most popular artworks, some museum observers worry that curators will choose exhibits that are the most crowd pleasing instead of the most challenging or artistically significant.

But museum directors say it’s about time the art world catches up to the private sector in retrieving basic information about their visitors to make informed decisions. 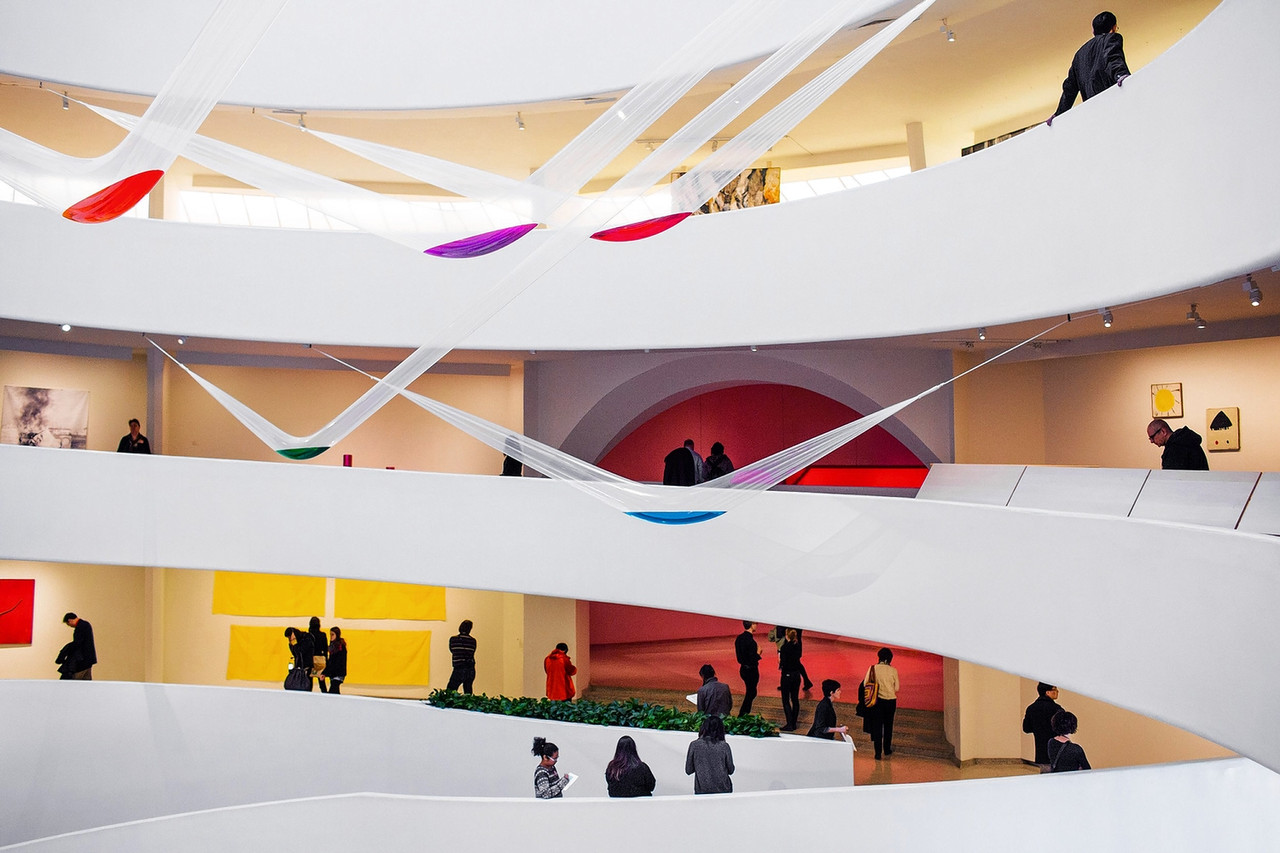 “If a mall developer knew how many people crossed the threshold into the mall but didn’t know what people were buying or sales a square foot or sales per customer, their enterprise would be considered fatally flawed—but we’ve accepted that lack of information for over a century,” said Maxwell L. Anderson, director of the Dallas Museum of Art. “All we know is who walks through the door. We don’t know who they are, what they’re doing or what they’re learning.”

In a world where statistics used to be gathered by a guy in a gallery with a clicker, the big-data push is a potential game-changer. Today, when some museums make a pitch to prospective sponsors, they come armed with sophisticated graphs indicating what types of people come to the museum, what brings them there and why. Understanding audience behavior enables museums to target marketing for future exhibits or personalize messages to visitors based on their past viewing history. From an educational standpoint, data can help museums find the most effective tools for teaching their audiences about the art on the walls.

In recent months, New York’s Metropolitan Museum of Art, the Museum of Fine Arts in Boston, the Nelson-Atkins Museum of Art in Kansas City, Mo., and the Minneapolis museum have all launched national searches for data analysts.

Museums are wrestling with how to guarantee the privacy of their newly acquired data. To protect themselves, many institutions stress that visitors must opt in to any museum program that accumulates data about them. They also encrypt credit-card numbers and unlink payment details from the guest profiles stored in their databases. 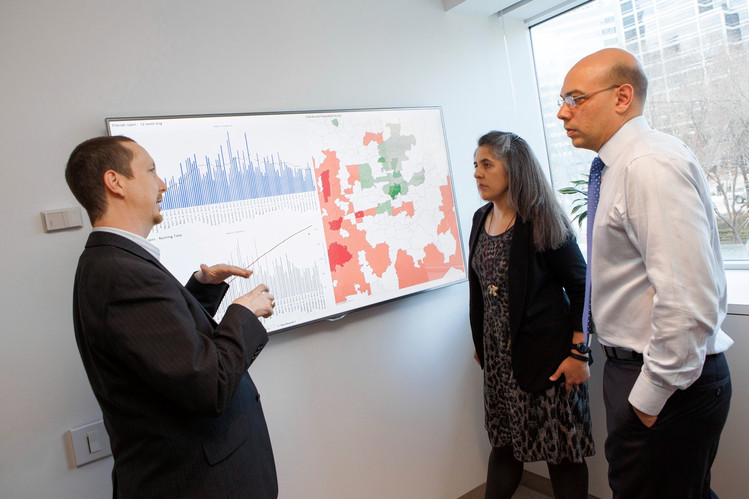 Even amid such cautions, the quest for data is intensifying. Until recently, the Met didn’t have a coordinated plan for collecting email addresses from its 6 million annual visitors, said Sree Sreenivasan, the Met’s chief digital officer. Now the museum asks for the information on an optional basis when visitors access the building’s free Wi-Fi. In only a few months, the Met has collected 100,000 email addresses.

More detailed information could help the museum deliver more personalized experiences to visitors, Mr. Sreenivasan said. “I want to be able to know exactly what people have seen, what they love, what they want to see more of, and have the ability to serve it up to them instantly,” he said. For example, “If someone loves a painting they’re looking at, they could get an instant coupon for the catalog, or a meal being sold at the cafeteria that’s based on it.”

The Met has also been experimenting with possible uses of digital beacons—devices that transmit a signal, allowing a smartphone to register its position within a given space. The beacons have the potential to direct visitors and deliver information about art while collecting data, on a voluntary basis, about guests’ movements inside the building.

In the art world’s search for audience data, the Dallas Museum of Art is often cited as a national leader. Through its two-year-old “DMA Friends” program, the museum offers free membership in exchange for names and email addresses (ZIP Codes and cellphone numbers are optional but many people often submit them). Before launching DMA Friends, museum deputy director Robert Stein sought help from a lead consultant on the design of the American Airlines frequent flier program. Like the airline, the museum uses the quest for points to encourage repeat visits.

Currently, the DMA is working with the Los Angeles County Museum of Art, the Minneapolis Institute of Arts and the Denver Art Museum to adapt DMA Friends to those institutions.

Bryan Smith, a 30-year-old medical researcher who joined DMA Friends with his wife two years ago, said he didn’t mind handing over some personal information if it meant he could participate in the rewards program. He is a frequent visitor, racking up enough points last year to win a 1930s-style beauty makeover for his wife, Lacey, and her friends at the museum. 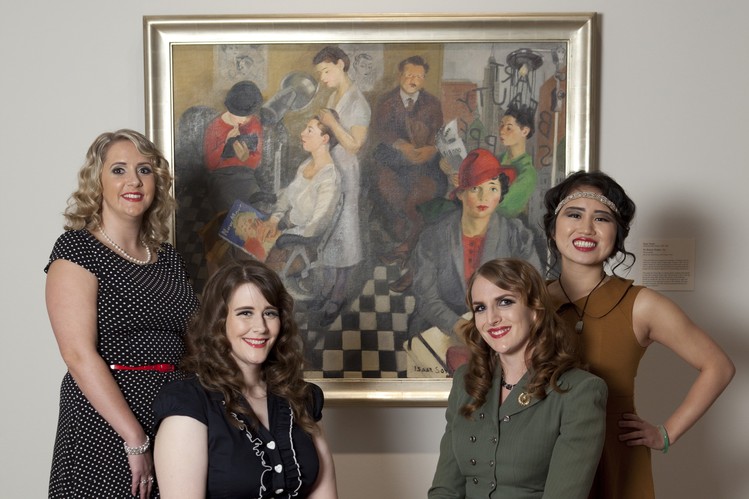 For the last six months, Lacma has been using digital beacons to send notices to visitors about artworks located around them. Guests sipping a cappuccino in the cafe, for example, might be alerted on their smartphone—via a fingernail-sized transmitter in the table—that the structure nearby in the plaza is a sculpture by the Venezuelan artist Jesús Rafael Soto. “We immediately saw the opportunity to say, ‘Here’s where you are and here’s what’s cool’—we’re there to sort of whisper in their ear,” said Amy Heibel, the museum’s vice president of technology and digital media.

The Norman Rockwell Museum in Stockbridge, Mass., is crunching numbers for a more conventional purpose: retail. The museum began working with a data analytics company last year to increase gift-shop sales, fine-tuning its email blasts based on customers’ past purchases or the buying patterns of first-time shoppers. The effort made a difference: This year’s Black Friday and Cyber Monday gift-shop sales were up 16% to 20% over last year, said Margit Hotchkiss, deputy director of audience and business development. The museum plans to integrate more metrics on visitors—like their ages, what exhibits they see and the lectures they attend—into its marketing campaigns sometime next year, she said.

Not everyone is diving into big-data gathering with equal enthusiasm. Some museum officials worry that such efforts might backfire if visitors feel they’re subject to the same intrusive tactics used by certain retailers. 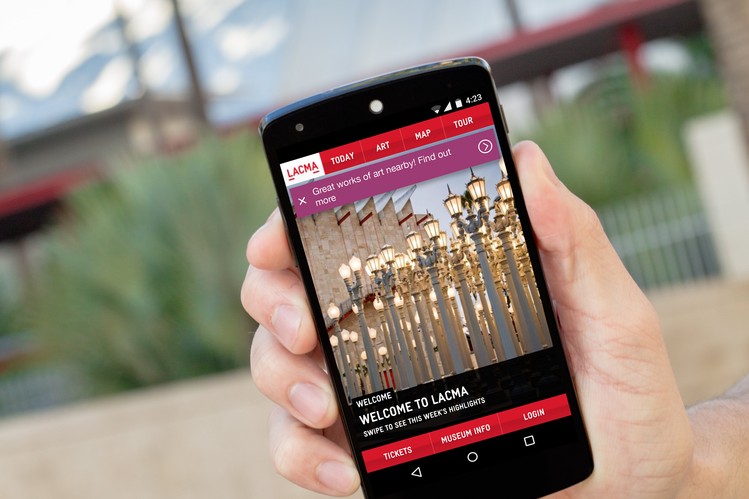 “We’re trying to balance that creepiness factor,” said Edward Gargiulo, director of membership and database marketing at the Museum of Fine Arts in Boston. The museum generally avoids getting into all the detail it has about its guests when communicating with them, he said. For instance, when the MFA sends digital surveys to guests after they visit, it deliberately omits the date of that visit in case that level of specificity would unnerve the email’s recipient.

Businesses that cater to museums are driving the analytics, too. “Because it’s so important to museums now, there is a push to get even more data,” said Simon Dale, vice president of engineering for Acoustiguide, which creates audio tours for museums and studies how people engage with museum-related apps. Mr. Dale said museums are increasingly interested in beacons, which can help institutions glean data about how quickly visitors move through galleries and even how long they stand in front of a particular work of art.

At the Guggenheim, such beacons likely will be operating by the summer, accessible to people who download the Guggenheim app or rent an iPod Touch from the museum. Visitors will get notifications about text, audio or video connected to select artworks. Guests also might receive membership pitches and ads from the gift shop, though museum officials are still figuring out what such notices would say and where inside the building they would be allowed to appear, said Naomi Leibowitz, the museum’s associate director of digital media and rights.

Getting the beacons in place isn’t straightforward. The curving interior of the Frank Lloyd Wright building can misdirect signals from electronic sensors if they aren’t placed in precisely the right spots. The museum also must pay attention to artworks with materials like water, which can interfere with beacon transmissions. Another problem comes when lots of people gather around a single artwork, absorbing the signal. (The company making the Guggenheim’s beacon, Estimote, tried to troubleshoot this scenario by taking several large sacks of potatoes, hanging them close together and studying what happened to the signal.)

Last Thursday, the day the Guggenheim is closed to visitors, Estimote senior director of business operations Tanuj Parikh climbed the museum’s winding ramps. He took notes on the building’s features to send to his co-workers in Krakow, Poland, where the two-year-old company is working on devices for museums, stores, hospitals and hotels. He watched as the museum experts figured out where to put sensors that conform to the building’s landmark restrictions. The staff eventually decided to stick the devices near the light fixtures.

For Mr. Parikh, the technology is a natural fit with art. “You learn where in museums people are spending more time, which pieces of art are more popular—you can curate and adjust what you’re doing in real time,” he said. “Some museums are now thinking about it like retailers, asking ‘How do we get these visitors to come back more often?’”

Write to Ellen Gamerman at ellen.gamerman@wsj.com