David Kordansky might not be the biggest player in the L.A. gallery scene, but his manic enthusiasm and seemingly genuine determination to draw attention to underappreciated artists make him the most interesting by far. 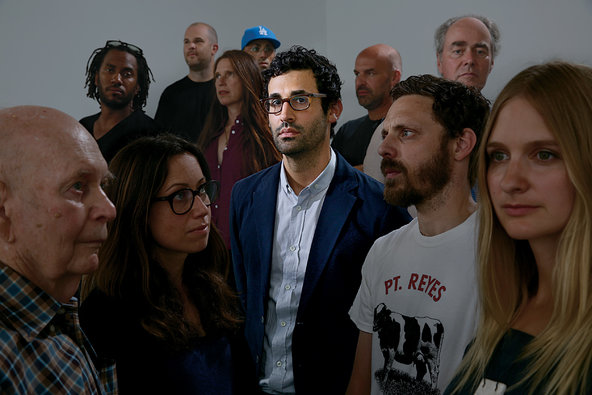 There is little in the world that David Kordansky enjoys more than talking about art. According to the artists he represents and the collectors to whom he sells, this is his gift. The artist Rashid Johnson, whom Kordansky has represented since 2009, said he can count on the fingers of one hand the number of times he and Kordansky have spoken about sales. There is no doubt that Kordansky, who is 37, can sell art like few other dealers, but he prefers to leave the closing of the deal to his staff. The venality of the current art business dismays him. Even in the 11 years since he opened his first gallery in L.A.’s Chinatown, the market has become bloated beyond recognition, he said, especially in the auction houses of New York and London. “I believe in art much more than I believe in the art world,” he told me last summer in the kitchen of his home in the Los Feliz neighborhood of Los Angeles, where he lives with his wife, the artist Mindy Shapero, and their two young children.

As he christens his new space in Los Angeles, he shares his creative touchstones — including several artists he doesn’t represent but admires nonetheless.

In person, Kordansky is almost compulsively candid, by turns hectoring and vulnerable, outspoken and shy. “He wears his heart on his sleeve,” is the phrase I heard over and over again from the people who know him best. Candor can, of course, also be a form of performance. Collectors who enjoy the company of artists appreciate his eccentric, intimate manner, which make them feel like the chosen few.

Beneath his gym-fit, boyish exterior and positive, Californian outlook, his persistence and gritty ambition are evident still. He may disdain aspects of the art market, but the success of his business is obviously a source of pride. “I didn’t come from money. I’ve bootstrapped every step of the way,” he said.

Kordansky’s latest gamble is on a 12,705-square-foot gallery — designed by Kulapat Yantrasast, head of the architecture firm wHY — which recently opened in a nondescript midcity neighborhood halfway between the L.A. art hubs of Highland Avenue and Culver City, where his last two spaces were situated. With its bow-truss ceilings and abundance of light, the former martial arts studio and car dealership now exudes an ambience of cloistered calm. Comprised of two equally sized galleries, a viewing room and on-site art storage, the space also boasts a lounge for artists and their families, and private gardens for staff. Kordansky has always aimed to create “a culture of ownership” among his gallery’s employees. In return, he receives a degree of loyalty rare in the notoriously factious and gossipy gallery world.

Kordansky was born in Biloxi, Miss., to American Jewish parents; his father was a doctor and his mother a family therapist. In the late ’90s he was accepted at the small but esteemed Hartford Art School. In 2000, he moved to the West Coast to study in the graduate art program at the California Institute of the Arts under conceptual artists including Michael Asher, Charles Gaines and Martin Kersels. (Kordansky now represents the painter Thomas Lawson, the dean of the art school.) After college, he continued to make installations, perform and curate exhibitions of friends’ work with his classmate, Jeff Kopp. From the outset he approached running a gallery as a creative project, perhaps more like an artist than a businessman, and soon became known as the primary dealer for what has been called “the post-Mike Kelley generation.”

Stories abound from those early days of Kordansky’s limitless, sometimes maniacal enthusiasm for his artists. The collector Mera Rubell remembers meeting him in 2006. Kordansky was determined to show her and her husband, Don, the work of a young artist he was representing, Aaron Curry, while Curry was on vacation. Reached by phone in Hawaii, Curry gave them permission to break into his studio, where Kordansky was soon pulling sculptures out of boxes and expounding on the artist’s ideas. The following morning — at 6 a.m., while shuttling the couple to the airport — Kordansky took them to meet Thomas Houseago, another sculptor he had recently begun to champion, who laid out his work in a studio borrowed for the occasion. Rubell says she was “blown away.” She and her husband later invited the two artists and their dealer to visit their museum in Miami. The trip was an inspiring and formative experience for the three men, who stayed up late into the night, drinking and arguing about Picasso, classicism and figuration in sculpture.

Kordansky’s passionate nature has not always worked in his favor. His professional relationship with Houseago buckled under the weight of its own intensity in 2009, when the artist left David Kordansky Gallery — a loss Rubell described as “a huge wake-up call” for the young dealer. Houseago finally settled with the international powerhouse Hauser & Wirth in 2011. “There was this abundance of youthful energy bouncing off each other that, in the end, was bigger than both of us,” Kordansky said ruefully. (Houseago agreed, but noted, “I can confidently say my career would not be where it is now without him.”)

The majority of his artists have stuck by Kordansky, however. His very first exhibition in Chinatown included Matthew Brannon, Patrick Hill, Will Fowler, Lesley Vance and William E. Jones, all of whom continue to show with the gallery. Brannon told me that Kordansky’s often blunt manner can be an asset, despite artists’ often fragile egos: “My therapist loves Dave. He says, ‘You always know where you stand with this guy; he treats you right, he’s telling you the problem.’ ” 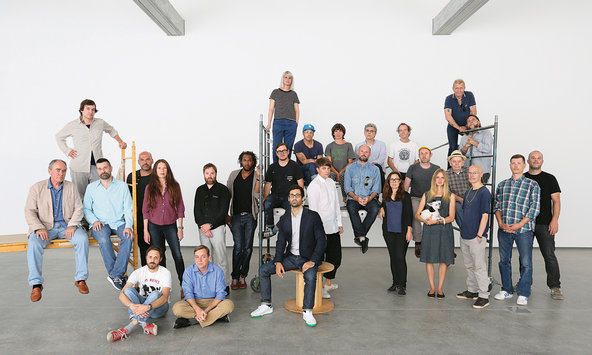 Kordansky (seated at center) with a group of his artists in Los Angeles. Credit Elena Dorfmann

Kordansky now represents over 30 artists and counting, hence the need for space. He is still far from being the biggest fish in the L.A. pond — nor, perhaps, would he want to be. He prefers to avoid competition with his neighbors, who include Regen Projects near Highland Avenue, Blum & Poe in Culver City, Overduin & Co. in Hollywood, Marc Foxx, also a stone’s throw from the Los Angeles County Museum of Art, and the power players Gagosian, Matthew Marks and Hauser Wirth & Schimmel, the last of which will take over a former flour mill in Downtown in 2015. When asked which galleries he feels a kinship toward, he instead looks across the Atlantic: to Johann König in Berlin, Standard (Oslo) in Norway or Herald Street in London. The art world loves youth, and Kordansky currently occupies the sweet spot between blue-chip establishment and cutting edge.

In contrast to his imposing new gallery space, Kordansky’s home is modest, perfectly scaled to a family of four and designed for living, not for entertaining. Kordansky grows kale, Meyer lemons and Persian cucumbers in the garden. He gave me the tour with the eagerness of a child showing off new toys. Succulents exploded from earthy ceramic planters made by Robert Maxwell and David Cressey on the deck outside the kitchen. In addition to pieces by artists Kordansky represents — Valentin Carron, Larry Johnson, Elad Lassry — the interior was furnished with Brazilian and Mexican Modernist pieces in rosewood and leather, and ceramics were displayed beside rows of art books on floor-to-ceiling shelves. A painted sculpture of a nude trapeze artist by the Japanese Pop artist Keiichi Tanaami sat on a coffee table, and drawings of outlandish figures by the Chicago Imagist Karl Wirsum hung on one wall.

Kordansky appreciates the Californian tendency to disregard hierarchies between creative disciplines; his gallery represents artists such as Ruby Neri and the Geneva-based Mai-Thu Perret, who both work in the tradition of John Mason, one of the Californian artists who, in the late 1950s, first brought ceramics into contemporary art galleries. (Mason, now 87, joined David Kordansky Gallery last year.) About half of his roster is made up of Angelenos, and a Californian sensibility infuses the program — not only in its emphasis on the region’s art-historical legacy, but also, more broadly, in its bias toward esoterica and marginalia, domestic themes and profane materials.

Kordansky likes to talk about “curating one’s life.” Shouldn’t we consider the architecture, the objects we handle, the furniture we sit on and the artwork we look at all as part of a unified aesthetic experience? He showed me a shelf of tiny Doyle Lane vases, each glazed a different color and texture. He would always rather stand in front of an object than look at a screen, and is particularly skeptical about what has recently been labeled “post-Internet” art — work made from Internet memes, online avatars, stock photos, patents and 3D scans. “We don’t even want to talk about the world any more,” he said. “We’re disconnected from core emotionality.”

In other places, talk of lifestyle is always related to an embarrassment about class, but in L.A. it’s an ongoing philosophical discussion. “The exterior of my life kind of runs itself,” Kordansky admitted over a lunch of grilled chicken and kale salad. “Now it’s about the interior, the spiritual. It’s about getting at the core of my existence — which is about my family.” There is little distinction in his mind between his professional and personal lives, or between his tastes in art and his philosophy of being. “It’s about having an open, holistic view rather than a myopic view,” he said. “Here culture is more attached to nature.” The greenery beyond the wide window, the home-grown salad and the stoneware planters seemed to reinforce his point.

Two years ago, Kordansky undertook a pilgrimage to the D.C. studio of Sam Gilliam, an 80-year-old African-American painter of the Washington Color School. Gilliam never achieved the level of recognition that his peers from the 1960s such as Kenneth Noland and Morris Louis did, in part because the art establishment didn’t know what to make of a black artist who refused to make work about race. Kordansky had been a fan of Gilliam’s radically innovative, unstretched, stained canvases for years, and had shared his enthusiasm with Rashid Johnson when they first met in 2009. (Johnson, who didn’t know many dealers — let alone young white dealers — who were interested in Gilliam’s work, was impressed, and agreed to join Kordansky’s gallery himself.) The pair asked Gilliam to do an exhibition in L.A., which Johnson would curate. They feared they were overreaching, and when they put their proposal to Gilliam in his studio, they thought he was laughing at them. In fact, they realized, he was crying.

As Kordansky told me this story, I saw that he was also close to tears. Since first working with Gilliam, he has placed his paintings in the collections of the Museum of Modern Art, the Metropolitan Museum of Art and the Rose Art Museum in Massachusetts. Without Gilliam, he said, the new gallery would probably not have been possible. There is nothing Kordansky is prouder of than having been able to bring him back into the spotlight. “The work has done for other people what it did for us,” he said. “There is no money in the world that can buy an experience like that.”

Correction: September 21, 2014
An article last Sunday about the Los Angeles art dealer David Kordansky, which recounted the key role he played in bringing the paintings of the 80-year-old African-American artist Sam Gilliam back into the spotlight, erroneously included a product among the types of things Gilliam bartered his work for at a lower point in his career. While he exchanged art for services such as dental work, he never traded art for laundry detergent.