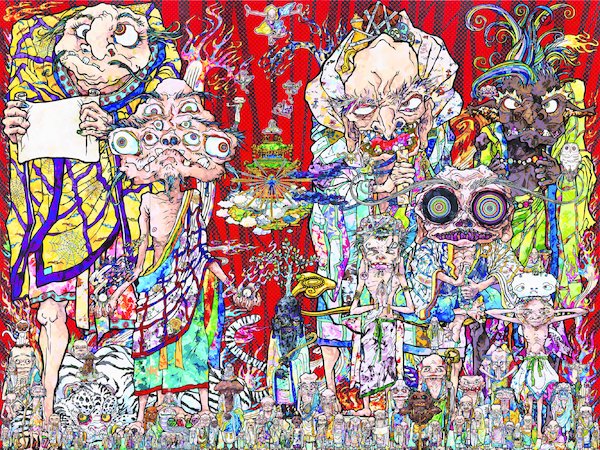 In his exhibition at Gagosian, Takashi Murakami appears unintimidated by big historical and religious subjects but strangely cowed by his fellow artists. Working in response to the devastating earthquake and tsunami of 2011 in the Tohoku region of Japan, he has come up with a quasi-spiritual installation of paintings and sculptures surrounding a copy of the gates of a Buddhist temple. It invites us to meditate and heal from the trauma of natural disasters and to savor expensively fabricated art objects while worshiping Koons, Hirst and Warhol (as if we needed another place to do that).

In an 82-foot mural inspired by the scrolls of the 19th-century Buddhist painter Kano Kazunobu, Mr. Murakami tosses manga-like figures into a stylized seascape and piles on a dazzling assortment of mosaic and marble effects. His sculptures, however, which include enormous painted-metal lion figures inspired partly by Damien Hirst’s “Hymn” and smaller mirrored ones reminiscent of Jeff Koons’s inflatables, feel too obvious — Buddhist icons in shiny, consumerist cladding.

Mr. Murakami is generally very good at aggregating and packaging ideas from other artists and epochs. (That’s what makes him such an interesting curator and mentor to other artists.) In this show he is working with some fascinating material, with evident ambition and astoundingly high production values, but you wish that some of this energy and expense would produce a more original statement.