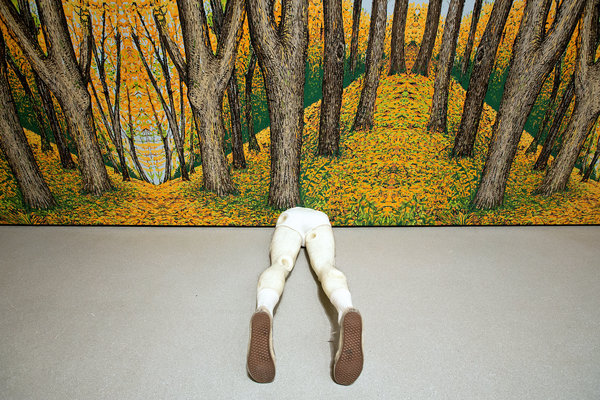 There are many ways to parse the highs and lows of the year just ending. Among the more uplifting events was, for example, the Detroit Institute of Arts’ being rescued from the city’s predatory creditors — and also from city ownership. Another was the large and fabulous assortment of Cubist works given by the collector Leonard A. Lauder to the Metropolitan Museum of Art, one of the most important gifts in the museum’s 144-year history. Among the lows was the Met’s clumsy redesign of its three-block-long plaza along Fifth Avenue. (Never mind who paid for it.) The deepest low: the needless destruction of the building formerly known as the American Folk Art Museum by the Museum of Modern Art.

But one of the most memorable aspects of 2014 was the unusually high success rate among New York museums in the design and installation of exhibitions of contemporary art. The routinely dull arrangement of exhibitions is something you learn to live with in this town, where museum space is at a premium, and gallery design is often uninspired.

But this year was different. There were several shows in which art and the surrounding architecture were seen to best — or at least much better than usual — advantage. Sometimes, the design and placement seemed almost laugh-out-loud serendipitous. The Guggenheim Museum’s exhibition “Zero: Countdown to Tomorrow, 1950s-60s” a survey of adventuresome postwar European art, fits its spiral container with rare perfection (the show runs until Jan. 7). Art and architecture seem both radical and quaint in equal part, which makes sense: around half the art on view dates from 1957-62, the very years during which the Guggenheim’s building was completed and inaugurated.

Not surprisingly, several of these shows were monographic efforts in which artists had some or a lot of say in the show’s layout. At the Whitney, Jeff Koons and the curator Scott Rothkopf fashioned the building into a Koonsarama of considerable clarity and pacing. The layout opened yet another window onto ways Marcel Breuer’s big boxy volumes can be divided up and viewers routed through them.

The year’s most stunning transformation of space occurred when the Modern (and its photography curator Roxana Marcoci) gave the photo-Conceptualist Christopher Williams apparent free rein over the survey of his obsessively self-conscious art. He proceeded to work magic with one of its most hopeless spaces: a dead-end shoe box on the museum’s sixth floor that has done well with historical material (Gauguin and Seurat, for example) but not with much of anything of a 20th- or 21st-century nature. Covering a few walls with print, Mr. Williams layered together the exhibition with elements of its catalog and checklist as well as vestiges of previous shows in the gallery. It was a thicket of self-reference, but whether you deciphered it all or not, the actual show’s spatial precision and expansiveness were a revelation, achieved in part by keeping the artworks somewhat sparse. 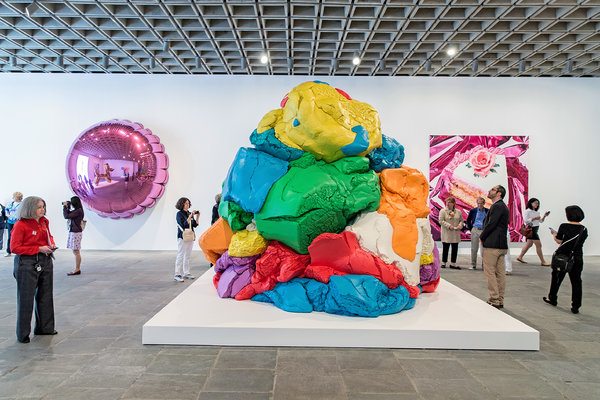 In October, Robert Gober’s retrospective, overseen by Ann Temkin, who heads the Modern’s painting and sculpture department, added to the museum’s short winning streak. No surprise, an overtly Goberesque sense of spareness and quiet prevailed, in keeping with this sculptor’s installation pieces as well as the Charles Burchfield survey that he organized at the Whitney a couple of years back. The Gober exhibition unfolds (until Jan. 18) throughout the museum’s atrium and the second-floor galleries usually reserved for post-1980 works from the permanent collection, and it makes them look better than they ever have.

Other memorable museum-installation moments this year include the survey of the artist Chris Ofili at the New Museum, which was overseen by Massimiliano Gioni, the museum’s artistic director, and has some of the perfection of the Guggenheim’s “Zero” exhibition. Divided into distinct bodies of work in accordance with the museum’s architectural layout, the show seems also to have installed itself. It is one of the first times the museum’s galleries have escaped the inherent grimness of their proportions and lack of windows.

And at the Brooklyn Museum, hardly known for illuminating exhibition design, the darkened “Killer Heels” (until Feb. 15) brings a fitting sense of glamour and remarkably successful spatial flow to another dead-end gallery, while the Judith Scott retrospective (until March 29) accentuates the ingenious color sense of this artist’s yarn-wrapped sculptures to sparkling effect with an arrangement against traditional white walls. (It was orchestrated by Catherine J. Morris, of the museum’s Sackler Center for Feminist Art, and Matthew Higgs, director of White Columns.) 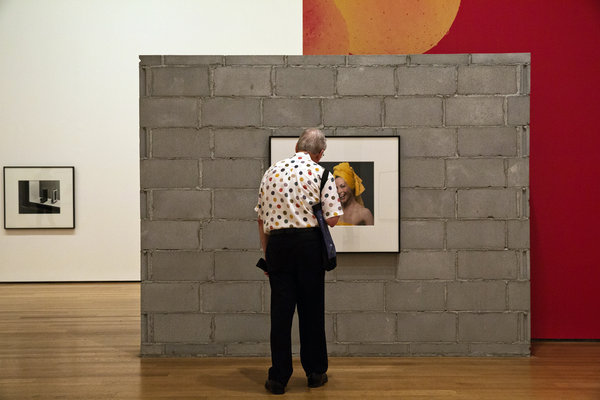 Of course, beneficial elucidations of space are never limited to big-name museums. Four occurring elsewhere this year that will stick in my mind include Darren Bader’s “The Show Is Three Shows,” a combination of found-object artworks and borrowed photographs evenly distributed around the walls and across the floors of the Andrew Kreps Gallery in Chelsea last spring. Another was “Macho Man Tell It to My Heart: Collected by Julie Alt,” an exhilarating exhibition of contemporary works accumulated by Ms. Ault, an inveterate alternative-art worlder, organized at SoHo’s Artists Space, where, for better and for worse, every show is some kind of departure from the exhibition form.

In Kai Matsumiya’s hole-in-the-wall gallery on the Lower East Side, Rainer Ganahl’s installation “El Mundo,” a double video projection, was based on an ad hoc performance by classically trained musicians at the unheated El Mundo discount store in Spanish Harlem in winter, amid only slightly distracted shoppers. It created a kind of reverie of art and determination in the conflation of two quite different spaces, uptown and down. And still open for viewing is the transporting exhibition devoted to Greer Lankton’s heroic, gender-bending life and work, which seems to all but float in a series of all-but-invisible vitrines at Participant Inc., through Dec. 21.