Now 37, Mr. Wiley is one of the most celebrated painters of his generation. He is known for vibrant, photo-based portraits of young black men (and occasionally women) who are the opposite of scared — they gaze out at us coolly, their images mashed up with rococo-style frills and empowering poses culled from art history. He maintains studios in China and Senegal in addition to New York. As a self-described gay man and the son of an African-American mother and a Nigerian father, he offers a model of the artist as multicultural itinerant. 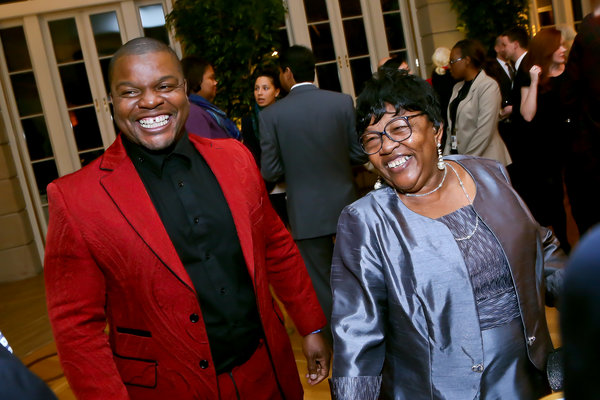 At the moment, Mr. Wiley’s work seems to be everywhere, from the set of the Fox drama “Empire” to all of the right institutions. His first museum retrospective opens at the Brooklyn Museum on Feb. 20, before traveling to museums in Fort Worth, Seattle and Richmond, Va. In January, he was summoned to Washington to receive a Medal of Arts from the State Department. (“I brought my mother as my date,” he said.)

A Wiley painting is easy to recognize. More often than not, it shows a solitary figure, an attractive man in his 20s, enacting a scene from an old-master painting. Dressed in contemporary garb — a hooded sweatshirt, perhaps, or a Denver Broncos jersey — the man might be crossing the Swiss Alps on horseback with the brio of Napoleon or glancing upward, prophet-style, golden light encircling his head. Typically the man has a lean frame, and his clear skin gives off a coppery sheen. His posture is regal: shoulders rolled back, head turned slightly to reveal the elegant sweep of a jawline.

Every Wiley painting is a two-punch affair — the masculine figures contrast sharply with the ornately patterned, Skittles-bright backdrops unfurling behind them. Based on design sources as varied as Victorian wallpaper and Renaissance tapestries, the backgrounds can look as if thousands of curling petals had somehow been blown into geometric formations across the canvas. For the moment depicted in the painting, the men are protected and invincible, inhabiting an Arcadian realm far removed from the grit of the artist’s childhood.

Mr. Wiley’s champions tend to view his work in overt political terms. He redresses the absence of nonwhite faces in museum masterpieces, “using the power of images to remedy the historical invisibility of black men and women,” as Eugenie Tsai, the curator of the Brooklyn Museum show, observes in the accompanying catalog.

But you can also read his work in psychological terms, and Mr. Wiley himself emphasizes the never-ending tension in the paintings between their male and female aspects. “It’s about a figure in the landscape,” he said of his output, adding that the backdrops symbolize the land. “For me the landscape is the irrational. Nature is the woman. Nature is the black, the brown, the other.” He added, “That’s the logic behind it, but everyone has their own sort of reading.”

Mr. Wiley, who attended graduate art school at Yale, has a taste for academic language. During our conversation he used the words “slippage” and “surd,” the last of which sent me to the dictionary. It’s a math term for irrational numbers with no square root.

Surd, in truth, seems to capture something essential about Mr. Wiley, his distrust of reductive explanations. Although he has a warm manner and a winning gap-tooth smile, there is an aloofness about him, too, especially when he does not care for a question. I asked him whether he felt an affinity with the work of Chuck Close, who similarly paints portraits that disclose next to nothing about their subjects.

“He fetishizes the material process instead of an external story,” he said.

What about John Currin, his fellow Yalie and devotee of brazen pastiche? “We have different projects,” was Mr. Wiley’s businesslike reply.

Even his sexuality, by his description, defies categorization. “My sexuality is not black and white,” he said. “I’m a gay man who has occasionally drifted. I am not bi. I’ve had perfectly pleasant romances with women, but they weren’t sustainable. My passion wasn’t there. I would always be looking at guys.”

Before meeting Mr. Wiley, I had seen a photograph of him in a magazine and was struck by his stylishness. He was wearing a suit whose jazzy stripes matched the background of one of his paintings. Jeffrey Deitch, the art dealer who gave Mr. Wiley his first one-man show in New York and represented him for a decade, had urged me, only half-jokingly, to try to look in the artist’s bedroom closet if I wanted to understand him. It contains, Mr. Deitch said, dozens of custom-made suits, many of them byRon & Ron, a tony label founded by Haitian twins.

Mr. Wiley’s studio does not look like the haunt of a dandy. You enter the building by buzzing past a steel-frame security door that opens onto a long, sunless courtyard. The heat wasn’t working on the day of my visit, and the artist met me at the door bundled in layers of paint-stained work clothes. He proposed that we talk in a small front office warmed by a space heater, and night was already falling.

A fish tank glowed with blue light. Above it hung what appeared to be a Basquiat from the ’80s, a smattering of cryptic words (“teeth,” for instance) scratched into its brushy surface. When I complimented the painting, Mr. Wiley replied mischievously, “I painted it myself.”

Clearly, he has a gift for mimicry. He can do a Velázquez. He can do a Jacques-Louis David. He can do a Basquiat. His devotion to pastiche has kept him operating on a meta level, and perhaps at a deliberate remove from his past. “The stuff I do is a type of long-form autobiography,” he said, with his usual attention to paradox, “but the starting place is not me.” 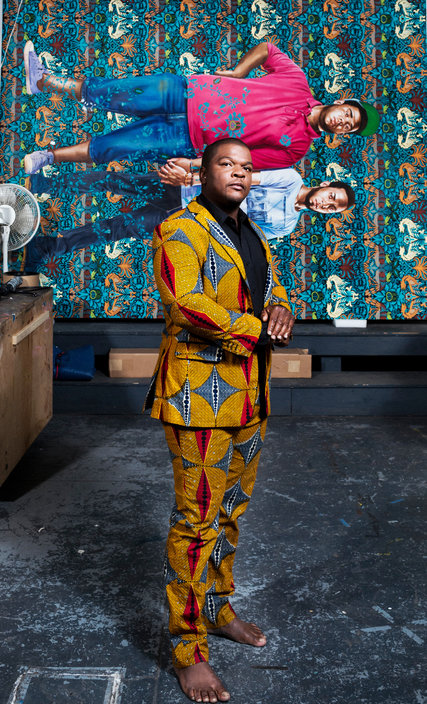 The artist said he never met his father during his childhood, or even saw a photograph of him. Isaiah D. Obot — a Nigerian citizen who came to the United States as a scholarship student — returned to Africa after finishing his studies. He went on to have a second family in Nigeria and a substantial career in city planning.

The artist’s mother, Freddie Mae Wiley, a Texas native, studied linguistics and eventually became a teacher. Kehinde was the fifth of her six children, and a twin. For most of his childhood, he said, the family subsisted on welfare checks and whatever spare change came in from his mother’s thrift shop. The store didn’t have a sign or a retail space, other than a patch of sidewalk in front of the house on West Jefferson Avenue. But everyone in the neighborhood thought of it as Freddie’s Store. Mr. Wiley recalls the mounds of merchandise: used books, windup Victrolas, tarnished gold-leaf picture frames, porcelain figurines of rosy-cheeked lovers.

“It was like ‘Sanford and Son,’ ” he said, referring to the ’70s sitcom about two men with a salvage shop, “junk everywhere.”

The children would help their mother scout for new inventory, driving around in a Dodge van that backfired noisily. “That was the more embarrassing part,” he recalled. He added, “You’re 11, and you don’t want to be seen jumping out to go through your neighbor’s garbage. That’s social death!”

At 11, everything changed. His mom enrolled him in a free art course at a state college. Suddenly, he knew how he wanted to spend his life; his career unfolded with remarkable velocity. He attended college at the San Francisco Art Institute, before winning a scholarship to Yale. He arrived in New York in 2001 as an artist-in-residence at the Studio Museum in Harlem.

Since then, Mr. Wiley has “street-cast” his paintings, heading out to scout for models — initially along the jammed sidewalks on 125th Street in Harlem and later, when he had enough money, overseas, in China, Israel and elsewhere.

His paintings all begin with an exchange of glances between artist and subject. Mr. Wiley describes the process as “this serendipitous thing where I am in the streets running into people who resonate with me, whether for cultural or sexual reasons. My type is rooted in my own sexual desire.”

He added, with amusement, “Most people turn me down.” The willing few are instructed to come to his studio to pose for photographs that serve as source material for the portraits.

Mr. Wiley delegates much of his production to a bevy of assistants, so much so that he has been accused of outsourcing his entire output. “Wiley’s paintings are created by teams of assistants in China,” the critic Ben Davis observed in an ulcerous review at BlouinArtinfo.com in 2012.

At the time, Mr. Wiley had declined to say much about his process, but during our meeting, he was candid about the division of labor. In general, he said, his assistants are responsible for painting the super-busy, detail-packed backgrounds. “Let’s face it,” he said, “I’m not doing all that.”

After a background is laid in place, he starts in on the figure, the gently lit face and body, which he seems to view as the heart of his work. Rendering skin tones, especially black and brown ones, is a subtle process, and, if you look closely at a patch of cheek or forehead in his paintings, you are likely to notice an array of indigo blues and alizarin reds.

Even so, his surfaces are thinly painted, and he speaks with distaste for the Expressionist tradition of visible brush strokes. “My work is not about paint,” he told me. “It’s about paint at the service of something else. It is not about gooey, chest-beating, macho ’50s abstraction that allows paint to sit up on the surface as subject matter about paint,” he said.

Mr. Wiley has his share of critics who say his work is formulaic and repetitive. Whether he’s working in oil or watercolor, he deploys the same strategy of inserting dark-skinned figures into very white masterpieces of the past.

To be fair, he has varied his subjects over the years. In 2012, for his debut show at the Sean Kelly Gallery, he added women to his roster of models. (“It was my idea,” Mr. Kelly said, explaining that he was pushing Mr. Wiley to branch out.) Mr. Wiley has also ventured into sculpture, and his coming show at the Brooklyn Museum will include six stained-glass windows as well as a few bronze heads that can put you in mind of the portrait busts of Jean-Antoine Houdon, who flourished during the French Enlightenment.

“I am interested in evolution within my thinking,” he said. “I am not interested in the evolution of my paint. If I made buttery, thick paintings, there would be critics of that. You just have to proceed.”

In all fairness, he is only 37, which is still young for an artist. It would make more sense to talk about his evolution when he is 60 or 70. See you back here then.