From a dismembered leg to a human-sized cigar, Robert Gober’s work is certainly indebted to Surrealists—but is it worth a trip to MoMA? 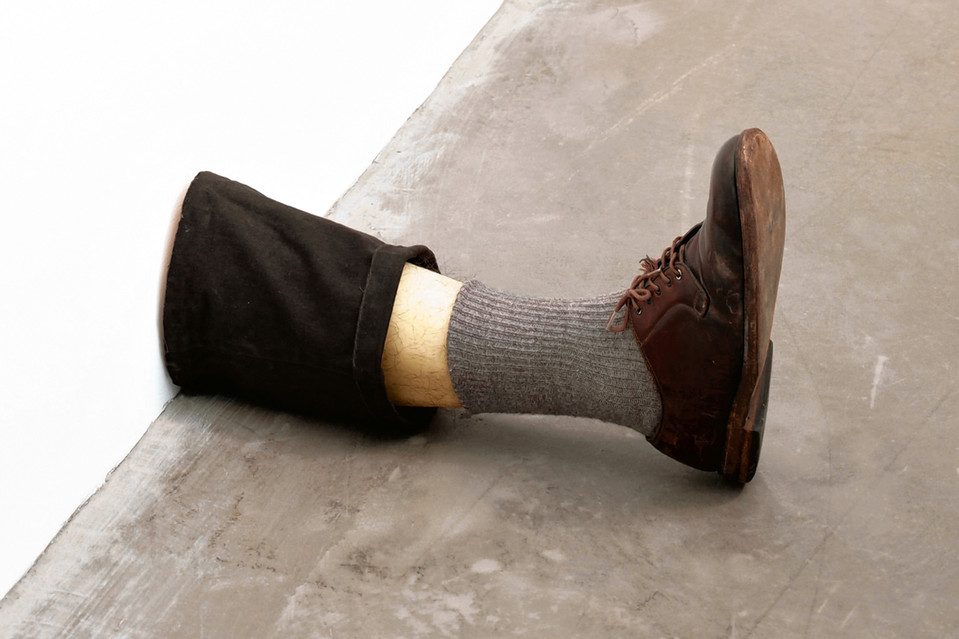 Robert Gober: The Heart Is Not a Metaphor

Few contemporary artists can rankle and befuddle viewers as sympathetically as the American sculptor Robert Gober (b. 1954), who hasn’t shied away from tackling serious subjects—including AIDS, slavery, terrorism and gay rights—or from playing the entertainer, the buffoon. In the opening gallery of his 40-year retrospective, “The Heart Is Not a Metaphor,” at the Museum of Modern Art, we encounter his neo-Dadaist classic “Untitled Leg” (1989-90). Like much of this exhibition, in which Madame Tussaud’s effigy meets the Duchampian Readymade, “Untitled Leg” transforms the commonplace into the surreal—and back again.

Mr. Gober turns the Readymade—the found object-become-sculpture—on its head. He and his studio assistants meticulously craft mundane domestic objects such as fake fruit, playpens, bottles of liquor, girl’s ice skates, newspapers, disposable diapers and white porcelain sinks entirely from scratch, until they are nearly indistinguishable from the mass-produced goods they mimic.

Fusing realism and Readymade, “Untitled Leg” is the first of what would become Mr. Gober’s signature handmade life-size beeswax sculptures of truncated human legs and bodies with actual human hair. Unfussy, drab and unnerving, “Untitled Leg” is oddly lifelike or corpselike. It comprises a man’s leg dressed in dark trousers, gray sock and old brown shoe, cut off at the shin and jutting, toes-up, straight out from the base of the gallery wall. The foot is turned out slightly, conveying relaxation and surrender; and its short, cuffed pant exposes hairy white flesh, which verges on the obscene.

“Untitled Leg” is initially amusing, but its strange, associative aftertastes linger. These include the dismembered victims of serial killers and Théodore Géricault’s morgue-based preparatory studies of severed limbs. “Leg” also dogs Duane Hanson’s hyperrealistic figurative sculptures, Hans Bellmer’s surreally twisted pubescent female dolls, van Gogh’s “Shoes” and René Magritte’s “Time Transfixed”—the steaming locomotive exiting the fireplace. And then there is the obvious: This man, like the Wicked Witch of the East, has perhaps been crushed by the museum.

Sly jokes tinged with melancholy abound in Mr. Gober’s work, which is one reason he’s so likable—even forgivable. As sculpture, “Untitled Leg” is lifeless. It just lies there. But in relationship to its entire spare gallery, in which we’re also confronted by a shallow, doorless, empty closet, the sculpture resonates—serving up humor, pathos and dread in equal measure. With “Untitled Leg,” Mr. Gober is at his most understated, barren and discomfitingly satisfying. He lets things fall with an ambiguous thud.

Unfortunately, “Untitled Leg” is the high point of Mr. Gober’s oeuvre and of MoMA’s survey, which was organized by Ann Temkin and Paulina Pobocha, working in close collaboration with the artist. A close second may be “Long Haired Cheese” (1992-93). Inspired perhaps by Méret Oppenheim’s Surrealist “Fur Teacup,” it is a beeswax wedge of Swiss cheese, sporting a thin, black flowing mane of real human hair.

Mr. Gober is at his rawest and most convincing—most surreal—when he keeps things simple; when he resists being too preachy and melodramatic. At MoMA, he twists a child’s playpen, like a Klein bottle, into two triangular jails; he rams culverts through a playpen and a stuffed chair, respectively; and he cuts barred prison windows—through which you can see daylight and painted blue sky—high into gallery walls. One eerily vacant room contains little more than five of the artist’s fixtureless, wall-mounted white sinks made of plaster, wire lath, wood and enamel paint. In various sizes and all from 1984, their blank faucet holes stare out like beady eyes.

But Mr. Gober can overwork his themes. Sinks here also have been oddly joined like Siamese twins and transformed seemingly into useless urinals. On a scaffold outside MoMA’s second-floor windows, two sinks have been partially buried in a patch of grass, announcing themselves like goofy tombstones. And in three subsequent sculptures of truncated, prone men’s bodies, Mr. Gober adds, respectively, white candles, embedded sink drains and a musical score written across hairy bare buttocks. In the center of the room is a human-scale cigar. Made out of tobacco sheaves, it looks like an overturned canoe. Elsewhere, a woman’s nude torso—evoking Gustave Courbet’s erotically charged “Origin of the World”—gives birth, shoe-first, to a man’s leg. Freud would have had a field day.

MoMA has spared no expense for Mr. Gober—literally pushing the boundaries of what is possible in a museum. Besides the outdoor scaffolding, they have installed running water and plumbing in numerous galleries and have jackhammered large holes in the museum’s granite floors. But are Mr. Gober’s theatrics worth all the fuss?

Typical here are kitschy, symbolically ham-fisted, sociopolitical installations. In one, from 1989-96, a wedding gown (representing “purity” and “equality denied to gay Americans,” according to the wall text) is surrounded by wallpaper (representing “excrement”). The wallpaper juxtaposes images of a lynched black male next to a white male, who sleeps soundly in his bed. Bags of kitty litter (the cleansing “metaphorical fulcrum” linking the violent imagery and dress) line the walls. This work should have never left the idea stage.

Another cornball installation, evoking the interior of a church, is Mr. Gober’s memorial to Sept. 11, 2001, where, according to MoMA, the artist (who grew up Roman Catholic) sought “to create a space of refuge and reflection.” Here, altered photolithographed pages from the Sept. 12, 2001, edition of the New York Times are positioned like stained-glass windows. We also encounter makeshift pews, chapels, bags of disposable diapers and bathtubs filled with running water. Hanging above the altar is a headless, crucified Christ—minus the cross—whose nipples shoot streams of “regenerative ‘living water’” into a big hole cut into MoMA’s floor. Far from being contemplative, this installation is a circus. It emphasizes not the loss suffered on 9/11 but, rather, the power of Mr. Gober to make his mark.

Despite Mr. Gober’s hyperbolic missteps, this show has flashes of redemption. His “Untitled Leg”—25 years later—still trips me up. And one intricate under-floor piece, “Untitled” (1997), which I had not seen before, is otherworldly. A large, open suitcase—another nod to Duchamp—sits on the floor. Inside, it reveals a sewer grate, through which you can see a brick shaft, which leads to a shallow, glowing pool filled with sea life and which offers glimpses of a man and infant. Mr. Gober had hoped with this work to “make a believable sculpture of a living tidal pool.” Surprisingly magical, it is the one instance in this exhibition where MoMA feels truly—not just physically—transformed.