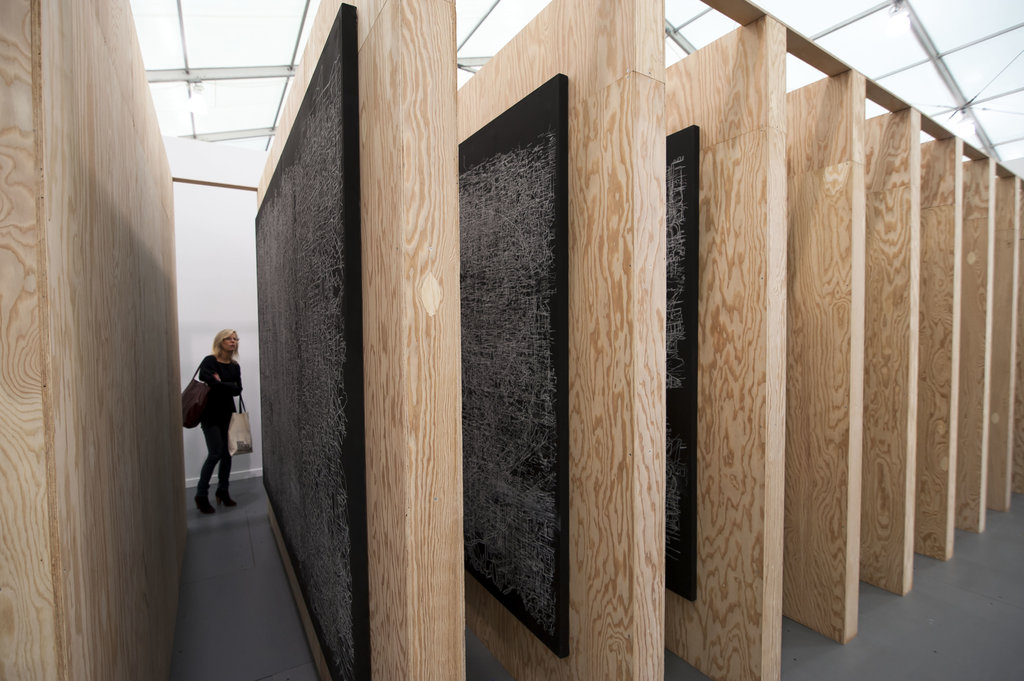 The amazing spectacle that is Frieze New York is up and running on Randalls Island. With more than 190 contemporary art dealers from around the world inhabiting a temporary, quarter-mile-long white tent, it’s a dumbfounding display of human creative industry. Reasoning that in the time allowed, no one reviewer could hope to achieve a comprehensive overview of all there is to see, we both went to look and report. What follows is a sampler of things that caught our attention.

GLADSTONE GALLERY (Booth B6) This museum-worthy show includes more than 200 small drawings from the painter Carroll Dunham’s archives. Dating from 1979 to 2014, they are presented on three walls in grid formation chronologically. Like pages from a personal diary, they track the evolution of Mr. Dunham’s antic imagination. From sketches of blobby, surrealistic forms to pictures of battling, cartoony male and female characters to images of naked, hairy wild women and men in edenic scenes, these irrepressibly lively, cheerfully vulgar drawings suggest a psychoanalytic pilgrim’s progress. (K. J.)

GAVIN BROWN (B38) This booth is filled by Rirkrit Tiravanija’s installation “Freedom can not be simulated.” It consists of about a dozen plywood walls arranged in parallel about a foot and a half apart. On one side of each wall hangs a large black canvas covered with squiggly chalk lines that you can only see fully by squeezing in between the walls. The first canvas in the series has the title drawn on it in big block letters. The installation offers itself as a pointedly coercive metaphor about the eternally necessary tension between freedom and constraint. (K. J.)

ANDREW KREPS (B54) Goshka Macuga’s “Of what is, that it is; of what is not, that it is not 2” is a giant black-and-white tapestry made on looms in Flanders. Over 10 feet high and 36 feet wide, it presents a panoramic scene copied from a photoshopped collage representing an incongruous gathering of art world luminaries and political protesters at Documenta 13, an exhibition in Germany in 2012. Ms. Macuga’s work pictures the moral and political contradictions of contemporary art and its social support system as powerfully as anything at the fair. (K. J.)

MARIANNE BOESKY (A30) This gallery offers “Revolution,” a sculpture by Roxy Paine that expresses a more ambiguous political sentiment. A chain saw with a bullhorn attached, both realistically rendered in wood, it’s a piece of impressive craftsmanship and a surrealistic dream image of political violence. (K. J.)

RATIO 3 (C56) For technical magic, nothing beats Takeshi Murata’s “Melter 3-D.” In a room lit by flickering strobes, a revolving, beachball-size sphere seems made of mercury. A hypnotic wonder, it appears to be constantly melting into flowing ripples. (K. J.)

NOGUERASBLANCHARD (A6) A found-object sculpture by Wilfredo Prieto plumbs the sublime. Suspended by cables a few feet off the floor, it’s a metal cage used by divers to observe sharks. Among its many possible implications is the suggestion of the artist’s descent into the monster-infested depths of the unconscious. (K. J.)

CROY NIELSEN (C1) In a tall, plexiglass display case here is a simple but philosophically resonant assemblage by Benoît Maire. Titled “Weapon,” it consists of a three-sided ruler attached to a rock by a wrist watch’s metal bracelet. It’s about rationalizing the irrational, an enduring task for art. (K. J.)

GALERIE LELONG (B12) A neon sign by Alfredo Jaar that reads “Teach Us to Outgrow Our Madness” is a fine prayer for what art might do for our troubled times. (K. J.)

One thing this fair allows you to do is to sample in one location what critics see around the city and the world. This includes emerging artists and historical shows. You’ll find many of them under a special designation, Frieze Focus, indicating galleries founded in or after 2003, and in Frame, a section that features solo presentations by galleries under eight years old.

SIMONE SUBAL (B21) This Bowery gallery is showing a Florian Meisenberg installation that fits in perfectly at an art fair because it takes its cue from another “nonspace”: the airport, with its spectacle of architecture, patterns, moving people and digital screens. It includes a video with excerpts from the film “Lolita” and an episode of “The Simpsons” in which Homer becomes a lauded outsider artist. (M. S.)

LAUREL GITLEN (B28) This gallery offers Allyson Vieira’s “Meander,” a structure made of metal building studs that uses the ancient meander pattern (also found on classic New York coffee cups) as its floor plan and suggests how certain graphic patterns are recycled throughout various empires. (MS)

CARLOS/ISHIKAWA (B34) This London gallery is showing Richard Sides’s collagelike assemblages, made from a personal archive of what he calls “good trash” collected outside his studio. (M. S.)

MISAKO & ROSEN (B20) This Tokyo-based gallery has objects by Kazuyuki Takezaki, who was inspired by the great ukiyo-e printmaker Hiroshige to recreate “landscapes” that sometimes take the form of sculptures, and include materials like a braided rug. (M. S.)

LE GUERN (A2) Dominating the space in this Warsaw gallery’s booth is a solo presentation of the Brooklyn artist C. T. Jasper, a tent made from around 160 sheepskins. (Get it? a tent within the big tent of Frieze). Inside the tent is a remix of the Polish director Jerzy Kawalerowicz’s 1966 film “Faraon (Pharaoh)” — but with all the human figures digitally removed from the film. (M. S.)

Gallerists are getting good at organizing historical shows, and several at Frieze are standouts.

JAMES FUENTES (C2) This Delancey Street gallery offers a presentation of the Fluxus artist Alison Knowles, best known for performance events like “Make a Salad” (1962). Here you can see objects made by Ms. Knowles from the ’70s to the present. If you hear a loud cascading sound at the south end of the fair, it is someone flipping over her “Red Bean Turner,” which is like an opaque hourglass filled with dried beans. (M. S.)

THE BOX (C14) This Los Angeles gallery has a great roundup of work by NO!Art, a group founded in 1959 that was distinctly (paradoxically, for this setting) anti-commercial. Collages and silk-screens by Boris Lurie, Stanley Fisher and Sam Goodman look incredibly prescient — like Mr. Lurie’s painting “Sold.” (M. S.)

GREGOR PODNAR (A22) In a smaller historical presentation you can see 1970s photographs and Conceptual drawings by two Gorans: Goran Trbuljak and Goran Petercol, Croatian artists who were routinely mistaken for each other in their local Zagreb art scene because of their first names. (M. S.)

PROJECTS Just outside the tent, the Projects section includes the Czech artist Eva Kotatkova‘s “Architecture of Sleep,” an outdoor installation with performers resting on platforms (and who should not be disturbed). Marie Lorenz, who works on New York’s waterways, is offering rides in a rowboat made with salvaged materials. Unfortunately, her “Randalls Island Tide Ferry” doesn’t offer service to or from the fair, but it accomplishes what most art tries to do: It transports you. (M. S.)

An earlier version of this article misspelled the surname of the artist who created “Melter 3-D.” He is Takeshi Murata, not Murato