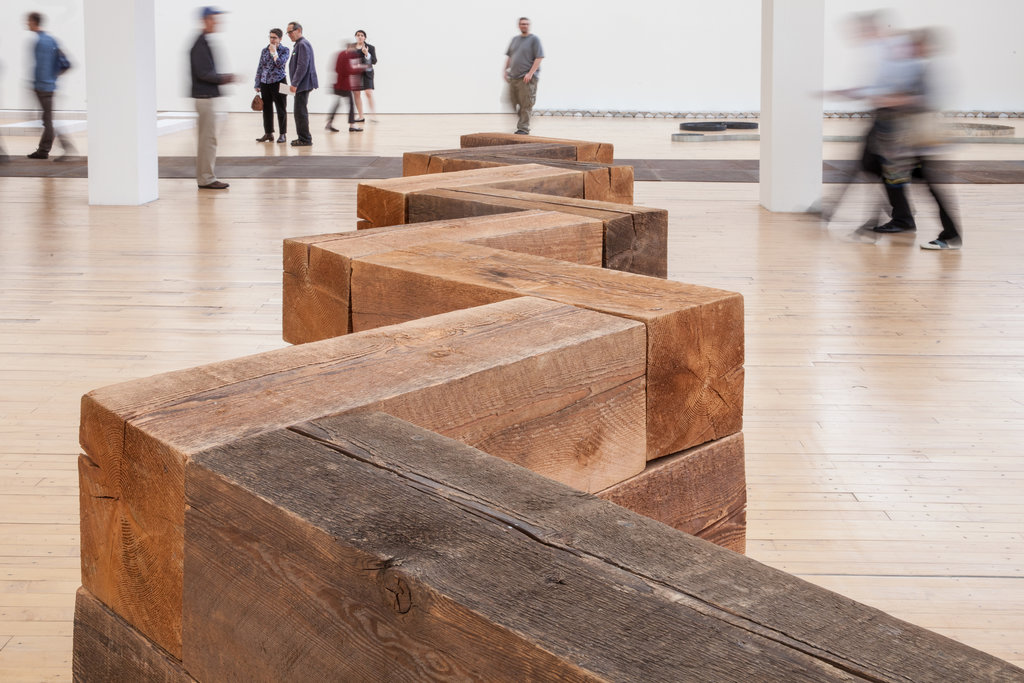 Carl Andre is one of America’s greatest living sculptors. He has been mostly absent from the American art scene for decades, but recently returned to oversee the installation of a new retrospective.

Carl Andre, a father of Minimalism and one of the greatest living American sculptors, decided to retire a few years ago, in his mid-70s. And for an exacting artist who usually insisted on arranging and installing most of his pieces himself, on site, retirement had a special ring of finality.

“People ask me what I do now,” Mr. Andre said recently. “And I tell them I do something most Americans find very, very hard to do: I do nothing.”

He was so determined to do nothing, in fact, that when the Dia Art Foundation began more than two years ago to plan a huge, long-overdue retrospective of his work — the show opens on Monday at the foundation’s outpost in Beacon, N.Y. — he told a reporter that he had informed the curators in no uncertain terms: “I can’t stop you from doing it, but don’t expect me to do anything to help.”

But over the last several weeks, to the foundation’s surprise — maybe even to his own — Mr. Andre has been making treks from his Manhattan apartment to Beacon to help oversee the installation, emerging from a kind of self-imposed seclusion that had begun long before his retirement; sightings of him in the art world, for more than two decades, were rare occurrences.

In part, this absence came about because of what happened early one morning in 1985, when Mr. Andre’s third wife, the promising Cuban artist Ana Mendieta, fell to her death from a bedroom window of their 34th-floor Greenwich Village apartment. She had had an argument with Mr. Andre, who later told the police he was not in the room when she fell.

He was acquitted of second-degree murder. But the death and highly publicized trial created a deep divide in the art world. It caused museums to shy away from him and his work for years and cast a shadow over a career that had been difficult to begin with, composed of work that, as much as any made in the 1960s and ’70s, occasioned the sometimes angry question “Why is that art?” (Asked in a 2011 interview about the effect of Mendieta’s death on him and his career, Mr. Andre said only: “It didn’t change my view of the world or of my work, but it changed me, as all tragedy does. But I have people who love me and believe in me.”)

During an era when many artists were pulling sculpture off the plinth and making it part of the world in a new way, Mr. Andre went further, taking it all the way to the ground, in pieces made up of metal tiles arranged simply in grids, lines or triangles, meant not only to be looked at but also walked on and experienced with the body. And while other artists were finding beauty and new meaning in raw industrial materials, Mr. Andre used such materials barely altered: aluminum ingots piled in pyramids; firebricks in rectangular stacks; timbers in dimensions available from the sawmill, arranged in basic geometric shapes.

“He was interested in the matter of matter, in what was right underfoot,” the sculptor Richard Serra said. “For me, when I first started out, that was enormously important.” He added: “I hope that Carl’s work is given the recognition that it deserves. And I really hope that younger sculptors pay attention to it.”

While Mr. Andre’s work is in many prominent public collections, there has not been an American survey of his career in more than 30 years, and awareness of his pioneering role in an important postwar sculptural movement has diminished along with his public presence. More than most artists of his generation, his presence was also integral to his art: He worked without a studio, traveling the world to galleries or places that commissioned pieces and often finding the materials to make the works in whatever city he was in. The sculptures were decisively human scale; Mr. Andre usually chose components sized so that he could move them all himself.

“It’s always been easier for me to do it myself, rather than to explain to somebody what to do,” Mr. Andre said, sitting one recent morning, looking at a 1979 piece composed of 121 square pieces of Douglas fir. “But I must say, as I have grown older, my physical capacities have been very much reduced. So I used to be able to sling those timbers around like nothing at all. And I don’t want to try nowadays.”

Asked why he decided to become personally involved in the installation of the retrospective, he shrugged. “People keep un-retiring me,” he said, “and eventually I just give in.”

Mr. Andre — who was raised in Quincy, Mass., and once worked as a railroad brakeman to pay his bills — is slightly unsteady on his feet these days. But he is as quick-witted and dryly caustic as he was said to be in his youth, when he was known as a kind of philosopher-scourge of SoHo, a Marxist who chafed at the commercial art world and being “a kept artist of the imperial class.” At 78, he looks like a Melville-ian sea captain, with a thick white beard under his chin and blue bib overalls, a utilitarian uniform he has worn for years, varied only by the occasional addition of a loose blue sweater vest knitted for him by his fourth wife, the artist Melissa Kretschmer, who is usually at his side.

Yasmil Raymond, Dia’s curator, said the prospect of installing more than four decades’ worth of his work without his input would have been daunting. Before his arrival one recent weekday, she and others had arranged a 2005 work of copper plates and graphite blocks, intended to be placed along a floor with a look of randomness.

“He might just laugh when he sees this,” said Ms. Raymond, who organized the show with Philippe Vergne, Dia’s former director, and the curator Manuel Cirauqui. “I’m trying to make it look random, but I’m looking at it and I’m seeing too much order.” (Upon arriving, Mr. Andre didn’t laugh; he suggested some changes and sympathized with the curator: “Even listing random numbers is hard, you know? Patterns start appearing.”)

Surveying the vast space allotted to his work inside Dia:Beacon, a former box-printing factory, Mr. Andre seemed a little daunted himself. “My work isn’t so big,” he said, almost plaintively. “It’s not big enough.” But he allowed that the diffused daylight coming in through angled skylights was ideal for seeing his sculpture as he intended, with a degree of directness that might seem simple but is never easy to achieve. “People want to spotlight things, and I hate that,” he said. “I like even light, shadowless.”

“No melodrama,” he added, waggling his fingers in the air.

Later, as Mr. Andre stood outside the museum supervising the re-creation of a 1968 piece, “Joint,” which consists of nothing more than hay bales he uses to “draw” a straight line on the earth, joining woods to field, it became apparent just how difficult simplicity can be. The line kept stubbornly curving, as workers laid the bales up the incline into the woods. “How many people does it take to make a straight line?” Ms. Raymond whispered to Mr. Andre.