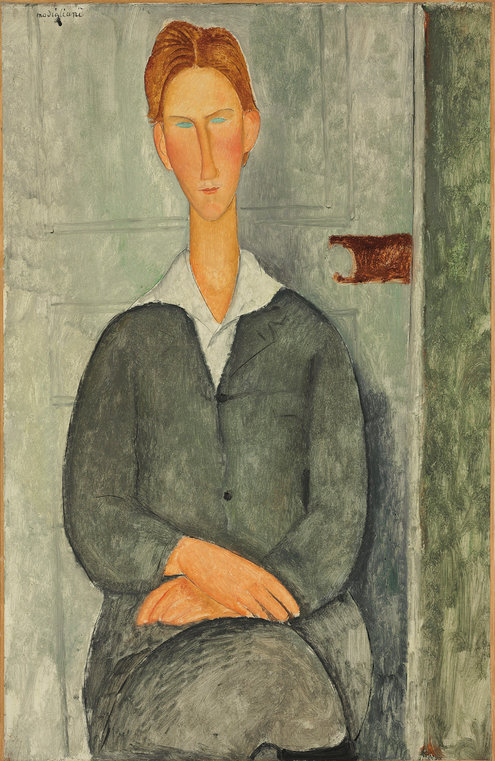 A Modigliani portrait from 1919 was sold for $17.6 million, above its high estimate of $12 million, at Christie’s on Tuesday. Credit Christie's Images, 2014

After all the predictions that prices were only going one way — up — the spring auction season got off to a tepid start at Christie’s on Tuesday night, where some examples of Impressionist and modern art by Picasso, Kandinsky and Dalí brought far less than expected; others barely skimmed by, and two classic works by Degas were left unsold, victims of estimates that were simply too high.

Christie’s was kicking off two weeks of sales, including the more buoyant segment of the market, postwar and contemporary art, and expectations were running high. The opening night could be seen as a reality check.

“The market continues to be discerning at the highest level,” said Conor Jordan, deputy chairman of Christie’s Impressionist and modern art department. The evening was not without its bright spots. A portrait of a russet-haired young man with blue eyes that Modigliani painted in 1919 brought $17.6 million, well above its $12 million high estimate. It had last been on the market in 2002 at Sotheby’s, where it was sold by Robert C. Guccione, publisher of Penthouse magazine. Back then it brought $8.4 million.

Christie’s had high expectations, having secured several of the season’s high-profile estates, including that of Huguette Clark, the reclusive copper heiress who died in 2011 at the age of 104. Both her father, Senator William A. Clark, and his second wife, Anna, loved all things French, including their art. The most expensive painting was Monet’s dreamy “Nymphéas,” or Water Lilies, painted in 1907 and inspired by the artist’s garden in Giverny. Mrs. Clark had bought it in 1930 from the Durand-Ruel Galleries in New York, and it had not been seen in public since. Four bidders went for the painting, which sold to Elaine Holt, a Christie’s expert in the Impressionist and modern art department based in Hong Kong, who bid on behalf of a client. She paid $27 million, above its $25 million low estimate but far short of its $35 million high.

Asian bidders, especially from mainland China, helped fuel many of the auction’s higher prices, Christie’s officials said. Of the evening’s 53 works, six went unsold. The evening totaled $285.9 million. It had been estimated to bring $244.5 million to $360.4 million.

Also coming to auction were three paintings by Renoir, including “Jeunes Filles Jouant au Volant” (“Young Women Playing Badminton”), painted around 1887. Mrs. Clark had purchased it in 1958 for $125,000, a high price at the time, when the Minneapolis Institute of Arts deaccessioned it; on Tuesday night it sold with only one bid at its low $10 million estimate, or $11.3 million with fees. (The painting had been on loan to the Corcoran Gallery of Art in Washington.)

But another Renoir saw some action. “Les Deux Soeurs,” a colorful scene of two sisters with wide-brimmed hats reading, painted around 1890 to 1895, sold to Sumiko Roberts, from Christie’s in London, who was taking bids on behalf of a client. She paid $8 million, well above its high $6 million.

Works from the estate of German collectors Viktor and Marianne Langen brought fairly solid prices and also some bargains. A 1942 Picasso, “Portrait de femme (Dora Maar)” of the artist’s lover and muse, regally posed in purple, was estimated at $25 million to $35 million. Paul Gray, one of the owners of the Richard Gray gallery in Chicago and New York, snapped it up for $20 million, or $22.6 million with fees. “Le Modèle,” one of Braque’s Cubist interiors, this one from 1939, that was expected to sell for $8 million to $12 million, sold for $9.1 million including fees. And a colorful 1909 landscape by Kandinsky sold to a telephone bidder for $17.1 million, above its low $16 million estimate.

Works on paper were in demand. The Langens’ Picasso watercolor, “Composition: Nu sur la Plage,” which he painted on July 13, 1933, was estimated at $1 million to $1.5 million but brought $2.5 million. Five bidders went after a gouache on paper of a Surreal setting — a giant leaf rising and round white ball — with two tiny people in a landscape that Magritte created in 1963. It had been expected to fetch $700,000 to $1 million, and sold for $1.25 million

As the crowd was pouring out of the auction house afterward, people were trying to draw conclusions from the evening’s results. “People are selective,” said Christophe Van de Weghe, a New York dealer. “Yes there’s a lot of money around — but the market is getting smarter.”