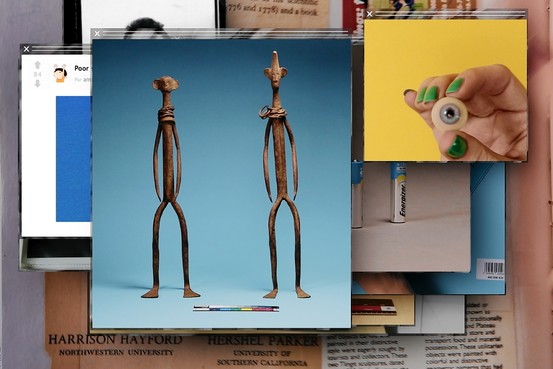 Turtles figure prominently in artist Camille Henrot's ambitious video chronicling the history of the world in 13 minutes. She sees the creatures as symbols of a prehistoric past and a burdened future. "The turtle, she's slow because she is carrying this massive round thing—it's like a figure of Atlas," she says.

Thinking hard about reptiles—and most everything else—is a hallmark of the 35-year-old French intellectual's work. On the heels of that video, "Grosse Fatigue," which won her the Silver Lion award for most promising young artist at the recent Venice Biennale, the artist is unveiling her first comprehensive U.S. museum exhibit. "Camille Henrot: The Restless Earth" opens Wednesday at the New Museum in New York.

The show features her abstract video telling the story of humankind through quick cuts of images like turtles and eyeballs, dead birds and oranges, fizzy water and the cosmos. Other pieces on view include her works on paper and a new installation of literature-inspired Japanese ikebana flower arrangements.

This spring, the New Museum is dedicating separate floors to three young artists rather than doing a group show. "It's a way to give exposure, to show the artists who are changing how art is being made," says curator Gary Carrion-Murayari. "Camille was a very easy choice for us in that respect."

Ms. Henrot created "Grosse Fatigue" during an artist fellowship at the Smithsonian Institution in Washington last year. She scoured the collections, filming employees opening drawers of exotic-bird specimens, flipping through files filled with dead bees, and so on. The film advances quickly through time by using overlapping windows on a computer desktop—search results from the Smithsonian's database. She incorporated her own footage and studio shots of brightly painted fingernails—a nod to her discovery that even the weightiest words in a Google search often seem to match the name of a nail polish.

It wasn't a solitary effort: Ms. Henrot worked with a cinematographer and film editor, as well as a makeup designer, models and production assistants. A writer created the text, which is performed like a spoken-word poem, and her partner, a musician named Joakim Bouaziz, created the score.

Ms. Henrot finds inspiration from disparate sources including eBay, where her purchases range from firemen's boots to nude vintage photographs. Sometimes she buys an item just because she likes the picture of its seller. After moving from Paris to New York in late 2012, she says the cargo container with all her stuff was held up by authorities for months—she suspects because its contents were so weird.

As a child, she wanted one day to have a "real job," eager to distinguish herself from her mother, an artist. Nevertheless, she attended art school in Paris, studying animated film. She took a job in an advertising agency, where she learned tricks like how to shoot a piece of cake to make it look more delicious (blow it with a hair dryer so it seems fluffy). Along the way, she was making films on her own, including an inventive music video for the band Octet in which the musicians were rendered as half-real, half-animated bodies. The film was shown in a 2005 exhibition at the Fondation Cartier, a contemporary art center in Paris, and her career as an artist was launched.

Ms. Henrot didn't grow up traveling—she says her mother was afraid of flying—but now her experiences in foreign cultures feed directly into her work. The videos featured at the New Museum include "Coupé/Décalé," an experimental film illustrating a coming-of-age ritual on Pentecost island in the Vanuatu archipelago where young people jump into a void while being held by liana vines around their ankles.

Sometimes her images can be hard to watch. Those turtles in "Grosse Fatigue" are featured with close-ups of their slick tongues and stony eyes. Ms. Henrot, who as a child had a pet turtle named Zoe that escaped through a window of her Paris home, shot the creatures during a vacation in the Seychelles. She filmed a little girl giving a huge turtle a banana and included the footage in her video. "I was interested in the stupidity of man feeding wild animal," she says.

Ms. Henrot brought home a souvenir from that trip: A scar on her hand from a turtle that bit her when she too tried to feed it.