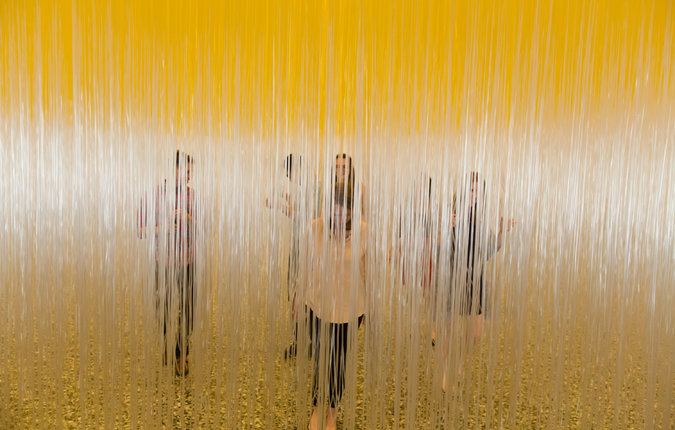 “The Houston Penetrable,” a kinetic sculpture by Jesús Rafael Soto at the Museum of Fine Arts, Houston, is a sea of plastic tubing for visitors to walk through

The ceiling has been reinforced. The guards have been retrained. Touching is allowed. Swinging like Tarzan is not.

After almost a decade of institutional effort and expense, an installation by Jesús Rafael Soto, a pioneer in the Kinetic art movement, is finally ready to open at the Museum of Fine Arts in Houston. Now come more challenges.

Ethereal and pristine, “The Houston Penetrable,” as it is called, may not remain that way for long after it makes its public debut on Thursday, in soaring Cullinan Hall, designed by Mies van der Rohe in 1958. Sixty visitors at a time will be allowed into its sea of 24,000 glistening clear plastic tubular strands hanging 28 feet from ceiling to floor and spanning the open mezzanine. Floating within is an orb of radiant yellow created by strands painted to compose a perfect ellipse. Viewers can activate the perceptual maze of vibrating light and color by playing among the tubes, as the work’s artist intended.

Born in Venezuela in 1923 and based after 1950 in Paris, where he exhibited alongside Alexander Calder and Jean Tinguely, Soto made over 25 Penetrables in his career; he died in 2005, at 81. A blend of geometric abstraction, Minimalist sculpture and playground, these simple grids of colorful PVC tubing were usually suspended from free-standing frames and often placed outside. Soto always considered them ephemeral, and only a handful have survived the inevitable wear and tear. 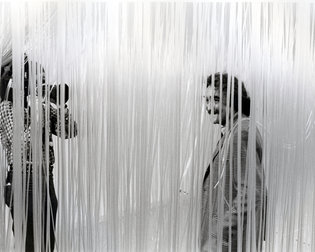 The Venezuelan-born artist Jesús Rafael Soto (1923-2005), right, inside one of his signature Penetrables in 1975. Credit via Museum of Fine Arts, Houston

Mari Carmen Ramírez, the Houston museum’s curator of Latin American art, commissioned a Penetrable for its permanent collection when Soto visited the museum for its landmark survey of Latin American Modernism, “Inverted Utopias,” in 2004. Soto completed this site-specific design — his largest piece and the only Penetrable to have a painted image — just weeks before his death.

“I have always seen this as an end-of-life work, with this sublime ellipse in the middle as a kind of presence,” Ms. Ramírez said, noting that all the previous Penetrables had been monochromatic.

The museum has tried to stay true to the artist’s free spirit toward his Penetrables while carrying out its essential job of preserving artworks. This year, the piece will stay up through Labor Day.

“This is an important thing to do, because many of Soto’s Penetrables, just like other works of Kinetic artists, whether they be Latin American or French or American, have deteriorated,” said Edward J. Sullivan, an art history professor specializing in Latin American art at the Institute of Fine Arts in New York. “There’s been a great deal of debate in conservation circles and in academic circles about how to restore these things and how to display them.”

Ms. Ramírez said, that because Soto’s artworks “really require the viewer to complete the piece,” the museum has “a responsibility to both the artist and audience to figure out how to show those works.”

“Contemporary artists have made it a point to erase the division between art and life and to make their work a participatory experience,” she added. “These works are leading museums to make commitments that would have been unheard-of a few decades ago.”

“The Houston Penetrable” is another in a long line of big-production experiential museum installations in recent years that have included the roof garden environments at the Metropolitan Museum of Art by Dan Graham (its current exhibition) and Doug and Mike Starn’s labyrinthine Big Bambú, in 2010; James Turrell’s immersive light piece filling the rotunda of the Guggenheim last summer; and Random International’s “Rain Room” at the Modern in 2013.

Gary Tinterow, director of the Museum of Fine Arts, Houston, compared the scope of the Soto undertaking to the efforts to mount Michael Heizer’s “Levitated Mass,” a mammoth boulder installed outside the Los Angeles County Museum of Art in 2012. (Mr. Tinterow declined to give the cost of the project.) Few museums would have dedicated its resources to an artist who, though acclaimed in Latin America and Europe, has little name recognition here. The Houston museum, however, has invested over $50 million in its Latin American program since 2001.

With the artist no longer present, the museum had to assume the primary role of producer. It reached out to Soto’s longtime collaborators in Paris, Paolo Carrozzino and Walter Pellevoisin, for technical expertise. Since no Penetrable had been painted before, they had to do extensive tests to determine what kind of pigment would adhere well to the plastic tubes. (Diluted silk-screen ink was the solution.) Several artisans worked for close to three years hand-painting and labeling the 18,000 elements composing the yellow orb. (Misplace a length of yellow, and it’s no longer a perfect ellipse.)

Mr. Carrozzino, an architect, designed a steel grid with 240 modules, each threaded with 100 strands, that affixes to the ceiling of Cullinan Hall. Other Penetrables were intended to last a few months. “When the museum explains they’re going to keep this for years and years, you need to think about the handling and organization just to mount, dismount, store and remount,” he said. “It’s almost sacred elements that will be part of the collection. It changes the attitude you have.”

Another complication was the weight. Cullinan Hall was designed by Mies so that art could be suspended from the ceiling. But tests showed the hanging points could not support the Penetrable, which weighs more than eight tons. The ceiling had to be reinforced with steel beams, which necessitated asbestos removal. The fund-raising and execution added several more years to the timeline.

Now that the transcendent playground is finally ready, no one knows if the ellipse will warp from the tubes stretching, or how stable the materials will be over time. Cleaning will not come until it’s removed in September for storage.

Ms. Ramírez envisions the Penetrable as a summer perennial. “We hope it will become a cult thing,” she said.

The museum has 400 spare tubes on hand, just in case.

“The Houston Penetrable” is on view at the Museum of Fine Arts, Houston, through Sept. 1; mfah.org.

A version of this article appears in print on May 8, 2014, on page C1 of the New York edition with the headline: A Romp in Gossamer, 8 Tons’ Worth. Order Reprints|Today's Paper|Subscribe