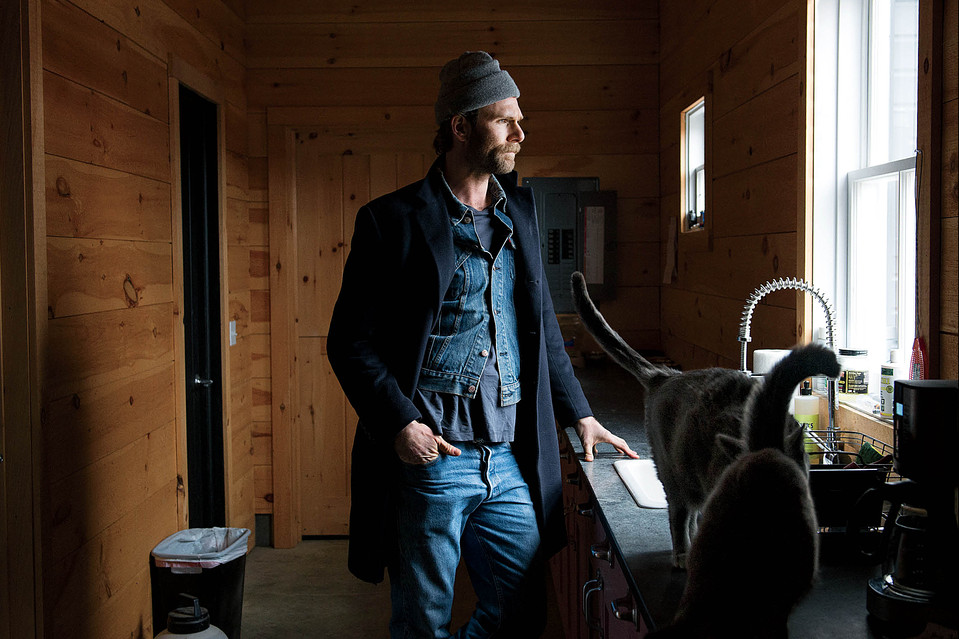 FARM BOY | Colen at his property in upstate New York, where many of his large-scale pieces are constructed. Photography by Tim Barber for WSJ. Magazine

THE 34-YEAR-OLD ARTIST Dan Colen lives in Manhattan's East Village, but the majority of his work is made either at his new studio in Brooklyn's Red Hook, overlooking a blue expanse of the Upper New York Bay, or at his 40-acre farm in Pine Plains, New York, where roosters crow and the air smells of manure.

These are not his native environments: Raised in Leonia, New Jersey, he came to fame in the mid-aughts as a member of a gritty, decadent clique of artists (including Dash Snow and Ryan McGinley) who helped define the New York downtown arts scene and whose bacchanalian exploits are still legendary. Colen is sober now, and the location of his studios says something about the scale, direction and pace of his work these days. "Walking out of your studio and seeing water instead of the Holland Tunnel, that's going to affect how you create," he says.

This month, the Brant Foundation, in Connecticut, is mounting a comprehensive exhibition spanning his entire career. His trademark pieces blending abstraction with low materials—paintings made from bubble gum or resembling bird poop, papier–mâché boulders covered in graffiti—will be displayed alongside newer works that seem to reflect his change in scenery: small landscape paintings, a heap of scrap metal occupied by canaries. Preparing for the opening, he lopes around the museum with a rangy energy, wearing a tight-fitting jean jacket and Chuck Taylor All-Stars. Sporting a terrifically cowlicked head of hair, he sometimes resembles an overgrown boy. His irreverent former self appears in flashes, like when he mentions, as a cop car passes his Range Rover on the highway, that there is currently a warrant out for his arrest (he missed a court date for carrying a type of knife that's illegal in New York City).

Descending from a line of makers—his father sculpts with wood and clay, and his grandfather was a mechanic and inventor—it's not surprising that Colen now nearly resembles a construction foreman. In the course of a day, he consults with riggers installing an outdoor piece at Brant and discusses with foundry workers how to move boulders. At his farm, one member of his crew is strapping an ash-wood barrel shut while another is tinkering with guitar cases. He counsels his staff of artisans and workers not to focus so much on formal perfection as on an intuitive process of discovery. "I tell them it's not about virtuosity," he says. "It's about commitment."