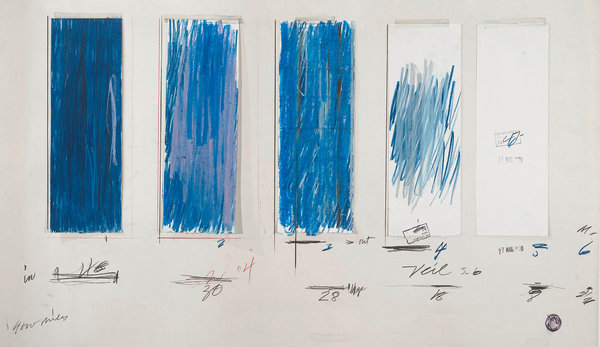 An untitled 1970 drawing with collage elements by Cy Twombly in “Treatise  on the Veil” at the Morgan Library & Museum. Credit The Menil Collection, Houston, Cy Twombly Foundation

“Cy Twombly: Treatise on the Veil” ostentatiously combines two museum trends: exhibitions built around one important painting, and the growing urge of museums of all kinds to feature modern and contemporary art. Here the yen for newness is lavishly advertised by a show centering on the billboard-size painting “Treatise on the Veil (Second Version),” a panoramic canvas measuring nearly 33 feet across that Cy Twombly (1928-2011) made in Rome in 1970.

The painting, from the Menil Collection in Houston, is displayed in what seems like splendid isolation despite the presence of 10 large related collages, some of which incorporate cardboard and plywood. Most were made on May 27 or 28 of that year and depict a work divided into several panels, just as the first version of “Treatise on the Veil,” from 1968, was.

But Mr. Twombly eventually settled on a single surface, which allowed for an expansive field loosely painted in shades of gray, similar to his blackboard paintings but more exuberant. To this he added a relatively restrained graphic narrative in white crayon: Five pairs of ruled parallel lines skip horizontally across the lower portion of the canvas, forming a kind of channel through which four or five hand-drawn lines crackle like sound, water or electricity — or, less specifically, the hum of life.

Attesting to Mr. Twombly’s ability to scale up drawing without sacrificing its essential intimacy, the work magnifies his exploration of line, registering his nervous energy as it fluctuates effortlessly from cursive to musical or mathematical notation to architectural sketch.

“Treatise” looks both glorious and slightly out of place at the Morgan, whose primary commitment is to drawings, prints and manuscripts from before 1900. It doesn’t help that it hangs above dark wood wainscoting, rather than closer to the floor and more in the viewer’s space. Still, the painting is a remarkable fusion of drawing and painting and of flamboyance and restraint. Among Mr. Twombly’s largest, it hasn’t been seen in New York in decades. Its return is a valiant attempt to bring new purpose to one of New York’s most beautiful and venerable art spaces.