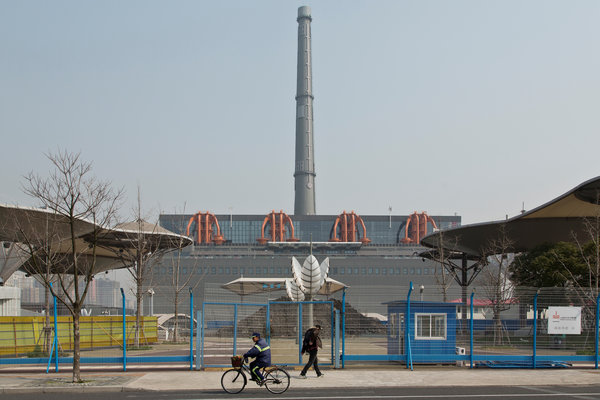 The Power Station of Art, the first state-owned contemporary art museum in China, is host to the 10th Shanghai Biennale. Credit Qilai Shen for The New York Times

By the time the Power Station was set to make its debut by playing host to the ninth Shanghai Biennale, construction workers and artists alike were hurrying until the final hours to prepare the space, a colossal decommissioned electrical power plant, for the show. Despite last-minute efforts, the hastily assembled biennale — with its roughly installed artwork, missing or misprinted wall labels and poorly trained staff — made for a lackluster start, leaving many with questions about the museum’s sustainability.

Now, two years later, those doubts appear to be diminishing as the Power Station, one of the few public institutions in China dedicated to contemporary art, finds its footing in the flourishing contemporary art scene here.

At the opening of the 10th Shanghai Biennale last month, crowds streamed through the seven-story Power Station to take in works by more than 80 artists from 20 countries, centering on the theme “Social Factory.” Organized by the writer and curator Anselm Franke of Berlin, the show, which runs through March 31, displayed few of the technical and production issues that dogged the preceding edition.

“This biennale is really a landmark event for China,” said Chris Dercon, director of the Tate Modern.

It is the first time in the biennale’s 18-year history that the chief curator had been given free rein to choose the theme. The decision to allow Mr. Franke that latitude was made by the museum’s academic committee, which was recently reorganized and includes prominent international figures like Mr. Dercon and Homi K. Bhabha, a humanities professor at Harvard.

“We want the Shanghai Biennale to be more international,” said Li Xu, deputy director of the Power Station. “This is a new kind of cultural confidence.”

The current biennale, which has been well received by critics and those in the museum world, is the latest milestone for the Power Station after a string of successful exhibitions. Highlights have included a large-scale exhibition on Surrealism shipped in from the Pompidou Center in Paris, a major solo exhibition by the Chinese contemporary artist Cai Guo-Qiang sponsored by Infiniti, and a 30-year retrospective of portraits in Chinese contemporary art organized by Mr. Li. The Power Station has embraced its role as one of the few public institutions in China dedicated to contemporary art, developing educational outreach and training emerging curators.

“The museum is really changing,” said Larys Frogier, director of the Rockbund Art Museum, one of the many private museums that have emerged in Shanghai in the last few years. “The next challenge for the Power Station as a public museum is to build not only a collection but a strong vision about Chinese contemporary art.”

Whether museum officials can convince the public that a government-mediated vision of Chinese contemporary art is credible remains to be seen.

While negotiating with censors has long been accepted by most art institutions, the Power Station, as a public institution, is often subject to greater scrutiny and censorship. Several artists were banned from exhibiting in the latest edition of the Shanghai Biennale. Pak Sheung Chuen of Hong Kong, for example, was cut from the show just a few days after a so-called blacklist of artists — which included him — appeared on social media, according to Cosmin Costinas, a biennale co-curator. The artists are said to have been banned from working on the mainland because of participation in recent pro-democracy protests in Hong Kong.

Another Chinese artist, Song Ta, was also prevented from participating by culture bureau officials even though a show of his works, which often address Communist Party corruption, ran unimpeded in a Beijing gallery.

“Censorship is part of being a public institution in China,” said Uli Sigg, one of the world’s leading collectors of contemporary Chinese art. This year works by Ai Weiwei were removed from an exhibition that Mr. Sigg helped organize for the Power Station about the history of a prize the collector created for Chinese contemporary art.

“The paradigm for contemporary art is to show things as they are, to document and to criticize,” Mr. Sigg said. “It doesn’t represent China in the way the government wants it to be represented to their people and to the outside world.”

Museum officials agree that escaping the shadow of politics is among the foremost challenges facing the Power Station.

“When people first look at us they see politics before they see art,” said Gong Yan, the museum director and former editor in chief of the Chinese-language magazine Art World. “We want to shift this attention so that when people come to see the exhibits they can see the individual value of the Chinese artists and not just the entire societal context.”

Another issue for the Power Station is funding. Although the government paid for the $64 million needed to convert the 450,000-square-foot space into a museum, the institution — like many other public museums today — still struggles to find enough money for operations. And with prices for contemporary art skyrocketing, a lack of financing has also hampered the museum’s ability to build a substantive collection.

“The biggest problem is that the government is great at taking care of the hardware but not the software,” Mr. Li said. While officials have demonstrated an increasing willingness to invest in contemporary art, he said, the “speed of change has not been as fast as you might guess.”

A foundation to solicit private donations is being established. In the meantime, money problems have also hurt the museum’s ability to attract professional staff members, officials say.

“When the government talks about culture in China they are always talking about construction,” said Qiu Zhijie,  who as chief curator of the ninth Shanghai Biennale experienced the museum’s growing pains firsthand. “No one thinks that culture is like planting a tree, where you have to continue watering it.”