Here comes the sun. And what a relief! With the winter solstice behind us, the days getting longer and brighter, and the dawn of a new year just around the corner, it’s a happy time to think about the light and the darkness and what those two terms mean for art and life.

THROUGH THE GLASS DARKLY Among the sunniest artworks on view now in New York is Spencer Finch’s “A Certain Slant of Light” at the Morgan Library & Museum. For this immersive installation, Mr. Finch covered many of the glass panes of the museum’s airy four-story atrium with rectangular sheets of translucent colored film. Suspended high overhead in the middle of the space is a set of clear glass squares, each freely turning in response to ambient air currents. As they turn, they reflect the sunlight filtered through the colored films, creating a crystalline, prismatic play of colors.

It’s all immensely subtle; visitors may not even realize they’re in the middle of a site-specific artwork. The title, taken from the first line of a poem by Emily Dickinson, seems appropriate, as it suggests an exquisitely sensitive attunement to ordinary experience. If you don’t remember the poem, however, you may be surprised on rereading it; it’s actually very dark. Dickinson’s slanted light “oppresses like the Heft/Of cathedral Tunes” and gives “Heavenly Hurt.” It’s “the seal Despair — An imperial affliction.” The last lines are chilling: 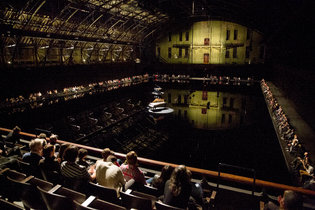 On the look of Death

You don’t sense in Mr. Finch’s installation anything like Dickinson’s psychic distress. That’s a problem. His work is pretty but thin; it could use some darker substance.

BLACK WATER UNDER A NIGHT SKY There’s plenty of darkness in “Tears Become ... Streams Become ...” a vast, magical installation by Douglas Gordon at the Park Avenue Armory. It consists of two grand pianos that seem to float on a hockey-rink-size expanse of black water. Mr. Gordon designed it as the setting for a program of water-related music by Ravel, Liszt and Debussy, among others, played by the pianist Hélène Grimaud. 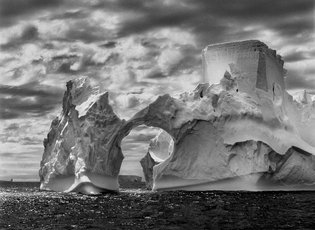 The final performance took place last Sunday. Now the installation remains, with a player piano operating silently, as if a ghost were at the keys.

Illuminated by small ceiling lights like stars in the night sky, the installation has a haunting, nocturnal feeling. The glassy water’s surface mirrors the armory’s high, barrel-vaulted ceiling and its infrastructure, creating a breathtakingly expansive illusion of deep architectural space. In its vertiginous complexity, it’s like a vision by the 18th-century printmaker Piranesi. Although in reality only about two inches deep, the water appears to be of indeterminate depth. What’s beneath the surface is unknown, a possibly infinite darkness, which you might read as a psychological metaphor for the unconscious, whence spring inspirations of creative imagination.

THE LIGHT OF THE DIVINE There’s much darkness in Sebastião Salgado’s art, too. At the start of “Genesis,” his exhibition of more than 200 photographs at the International Center of Photography, there’s a spectacular black-and-white picture of a giant iceberg under a luminous sky of mottled clouds. It’s an amazing object. Rising from a flat, black ocean, it has sharp peaks and ridges, a great hole through part of it and, most improbably, a blocky formation resembling the top of a medieval castle towering high over the lower, craggy base.

The iceberg picture belongs to a project Mr. Salgado began in 2004 to seek out and photograph landscapes, seascapes, wild life and indigenous peoples that appear untouched by the effects of technological progress. Hence the biblical title “Genesis,” suggesting a prelapsarian state of nature. Thus framed, the light that so strikingly breaks through tumultuous clouds in many of Mr. Salgado’s landscapes has a divine cast to it; it’s the beneficent light of God pouring down over all things great and small. What’s not pictured but looms off-camera are shadows of what William Blake called the “dark satanic mills” of modern industry. 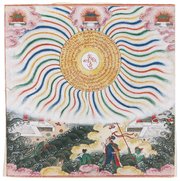 Like Ansel Adams before him, Mr. Salgado aims to arouse environmentalist concern. He and his wife, Lélia Wanick Salgado, founded the Instituto Terra, a nonprofit organization dedicated to reforestation and environmental education. There’s something contradictory about Mr. Salgado’s project, though. The camera is, after all, a modern machine, and he uses machines to travel by land, water and air to the remote places he captures on film. He is himself a kind of technologically armed invader altering planetary ecology, however slightly or greatly, wherever he goes. But that dimension isn’t reflected in his seemingly innocent photographs, and so they’re less complexly thought-provoking — less fully enlightening — than they might be.

REFLECTED LIGHT, SILVERY AND ENIGMATIC There are many different kinds of enlightenment. Consider “The Flat Side of the Knife,” an installation by Samara Golden at MoMA PS 1. Standing at a railing where you look into the museum’s two-story-tall Duplex Gallery, you behold a confoundingly complicated interior architecture with furniture, stairways, musical instruments, wheelchairs and many other domestic items rendered in silvery, foil-clad foam board. Light bounces every which way, creating a kind of crystalline, 3-D Cubism. Far below — farther than seems really possible — you see an arrangement of chairs, a sofa and a colorful rug. Then, looking up, you see the same objects attached upside down to the ceiling. It turns out that the gallery’s floor is covered by a grid of large mirrors; what you see when you look down isn’t real but a reflection of what’s above. Everything is doubled, and what you think is up may really be down, and what you take to be real may be a virtual reflection of the real.

The installation includes two videos projected on wall-mounted screens, both showing ocean waves rhythmically lapping a sandy beach. The sound of the waves fills the gallery. The screens are like windows to the outdoors, and they also suggest something metaphysical beyond the constructed interior. Maybe this is what Ms. Golden means by her thoughts quoted in the exhibition’s introductory text panel: “I hope my work can be like a door that opens to other times or moods. Maybe we can see that this kind of door is possible, but we don’t yet know how to cross its threshold.” 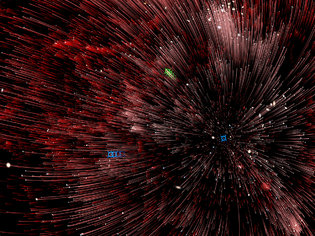 BY THE LIGHT OF A WHITE MOON, ENLIGHTENMENT You may recall Aldous Huxley’s treatise on mescaline-assisted mind expansion, “The Doors of Perception,” which takes its title from William Blake’s mystical aphorism: “If the doors of perception were cleansed every thing would appear to man as it is, Infinite. For man has closed himself up, till he sees all things thro’ narrow chinks of his cavern.”

But how, exactly — barring the use of psychedelic drugs — might a person progress toward this sort of enlightenment? A fascinating and remarkably thorough manual for seekers of higher consciousness is on view at the Rubin Museum of Art in an exhibition called “The All-Knowing Buddha: A Secret Guide.” It presents 54 paintings that illustrate step-by-step instructions for followers of Tibetan Buddhism. Delicately painted on 10-inch-by-10-inch paper sheets, most of the pages depict a monk having fabulous visions in a verdant landscape.

The album is thought to have been commissioned by a Mongolian patron and executed by unidentified artists in a Chinese workshop in the 18th century. Acquired in 1923 by a European missionary working in Inner Mongolia, it now belongs to the Museum aan de Stroom in Antwerp, Belgium. Although the album has no written text, scholars have done a lot to make sense of its trippy imagery. Its most recent examiners, Karl Debreczeny and Elena Pakhoutova, both Rubin curators and organizers of the exhibition, have provided brief, lucid explanations for every page. Leaf 36, for example, represents “full and complete enlightenment” in the form of a white moon emanating rainbow-hued light waves. Ensconced on a great blue lotus that rests on an ornate hexagonal pedestal, it’s guarded by a pair of fierce, flaming demons who are like cosmic bouncers.

DARKNESS UNFATHOMABLE What does one who ascends to the level of the all-knowing Buddha know? That’s hard to say for an ordinary mortal, but it might be worth asking such an enlightened one if he or she could shed light on the mystery of dark matter. That’s the subject of “Dark Universe,” an entertaining and educational 30-minute movie projected on the domed ceiling of the Hayden Planetarium. Created for a popular audience, it conveys up-to-date knowledge about how the universe began, what it seems to be doing now and where it might be going.

Here we learn something that has so far stumped scientists: It seems that if you calculate all gravitational forces observably in play in the universe, you can’t explain how it is that the stars and galaxies are organized as they evidently are. Something must be exerting some kind of gravitational energy to keep things in place, but what that is has eluded detection by any and all human-made instruments. It neither gives off nor reflects any kind of electromagnetic radiation. Yet if scientific theories are correct, there must be a shocking amount of it: Only 5 percent of the universe is what we think of as ordinary matter. The rest is unfathomably dark.