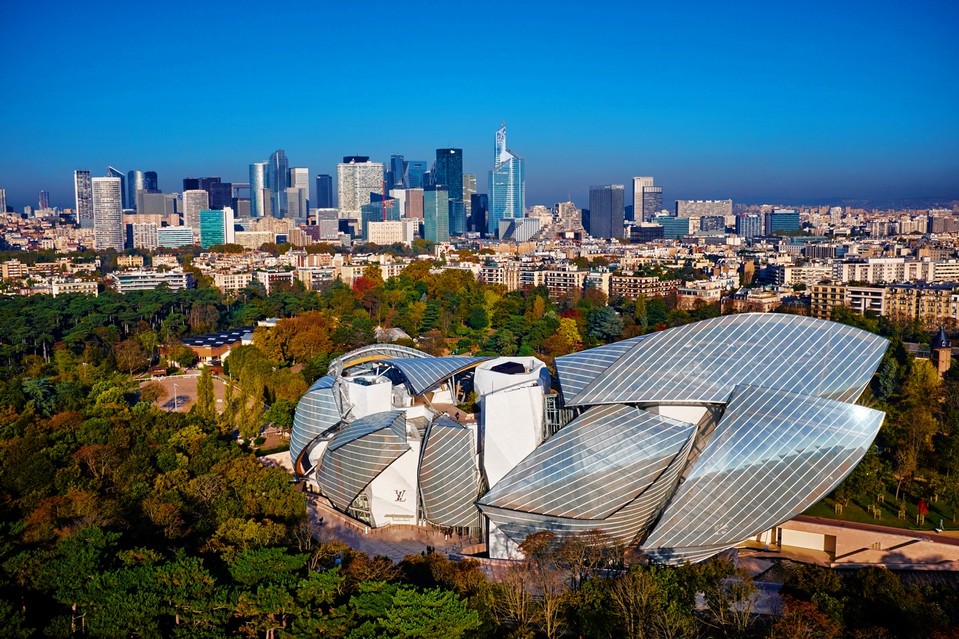 As you approach Frank Gehry’s monumental structure on the edge of Paris in the verdant Bois de Boulogne, you first see a billowing array of glass panels joined together like a three-dimensional collage, very much suggesting a ship under sail, an illusion reinforced by the sunken reflecting pool fed by a ground-level cascading fountain. Here, glass becomes Mr. Gehry’s defining material, molded in a wholly novel way. The architect of the titanium Guggenheim Museum Bilbao in Spain and the stainless-steel Walt Disney Concert Hall in Los Angeles has found yet another way—entirely new—to make our jaws drop, inspired in part by his love of yachting and in part by the monumental barrel-vaulted glass roof of Paris’s Grand Palais exhibition hall off the Champs-Élysées.

This is the Fondation Louis Vuitton, built by LVMH, the company whose luxury brands include Louis Vuitton and Moët Hennessy, as well as Dior, Fendi, Bulgari, Donna Karan, Givenchy and a few dozen others. LVMH may well be the ideal client for this structure, perhaps the most self-conscious work of architecture designed to house art since Frank Lloyd Wright’s Solomon R. Guggenheim Museum on New York’s Fifth Avenue.

The 3,600 glass panels are each unique—shaped in kilns specially developed for the job. Each contains white ceramic dots to temper the sun’s heat. And then there is the museum itself, a complex structure encompassed by the glass sails and constructed mainly of Ductal, an ultra-high-performance concrete. 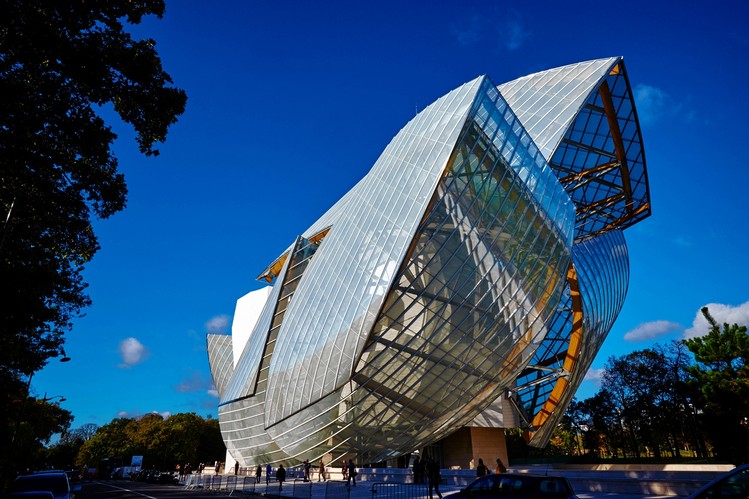 ENLARGE
The building’s 3,600 glass panels are each unique—shaped in kilns specially developed for the job. Bruno Morandi/Corbis

Several early critics couldn’t resist the urge to knock a “starchitect” of Mr. Gehry’s popularity working for a luxury goods conglomerate marketing exclusively to the wealthy and those who aspire to be so. Artnet News described the structure as “The Sydney Opera House crossed with a blimp.” Others criticized the location, far out of Paris proper, and characterized the early exhibitions as mediocre work by big-name contemporary artists. But these naysayers missed much that is enthralling here.

There is no way anything resembling this singular structure would have been allowed in the lovely, dense, over-administered heart of Paris. With the exception of I.M. Pei’s Louvre Pyramid of 1989, entirely enclosed in that museum’s main courtyard, nothing much that is new has gone up there since the 1977 opening of the relatively staid Centre Pompidou, designed by Richard Rodgers and Renzo Piano. Just this week a French appeals court blocked the modest renovations proposed by LVMH to the abandoned La Samaritaine Department Store. LVMH plans to appeal.

Fortuitously, LVMH administers for the City of Paris the Jardin d’Acclimatation, a children’s park in the Bois on the western edge of the city. The garden, created by Napoleon III in 1860, includes an archery range, house of mirrors, miniature-golf course, narrow-gauge train, pony ride, puppet theater, and science and art museums for children. But on its edge stood an ugly, abandoned bowling alley.

Mr. Gehry and LVMH’s CEO, Bernard Arnault, proposed to replace that hulk with the Fondation. Still, Paris’s mayor didn’t come around until Mr. Gehry suggested that the building be largely glass. “We talked about buildings in parks made of glass, like the old Crystal Palace in London’s Hyde Park and the Grand Palais,” Mr. Gehry told me, “so I did some sketches that he liked.” But these uniquely shaped and sculpted glass sails required Mr. Gehry and his colleagues essentially to invent a new process. “The cost of the building went up considerably having a double skin, because you can’t hang art on glass,” Mr. Gehry said.

Fortunately Mr. Arnault’s pocket has great depth—he is one of the richest men in Europe. Mr. Gehry prides himself on bringing his buildings in on budget, but he told me that he didn’t know the cost of this one and wasn’t working against a prescribed budget. Mr. Arnault’s chief cultural aide, Jean-Paul Claverie, who headed the building project, told me that it cost more than $120 million, but that seems low, perhaps by half, according to an individual close to the project. 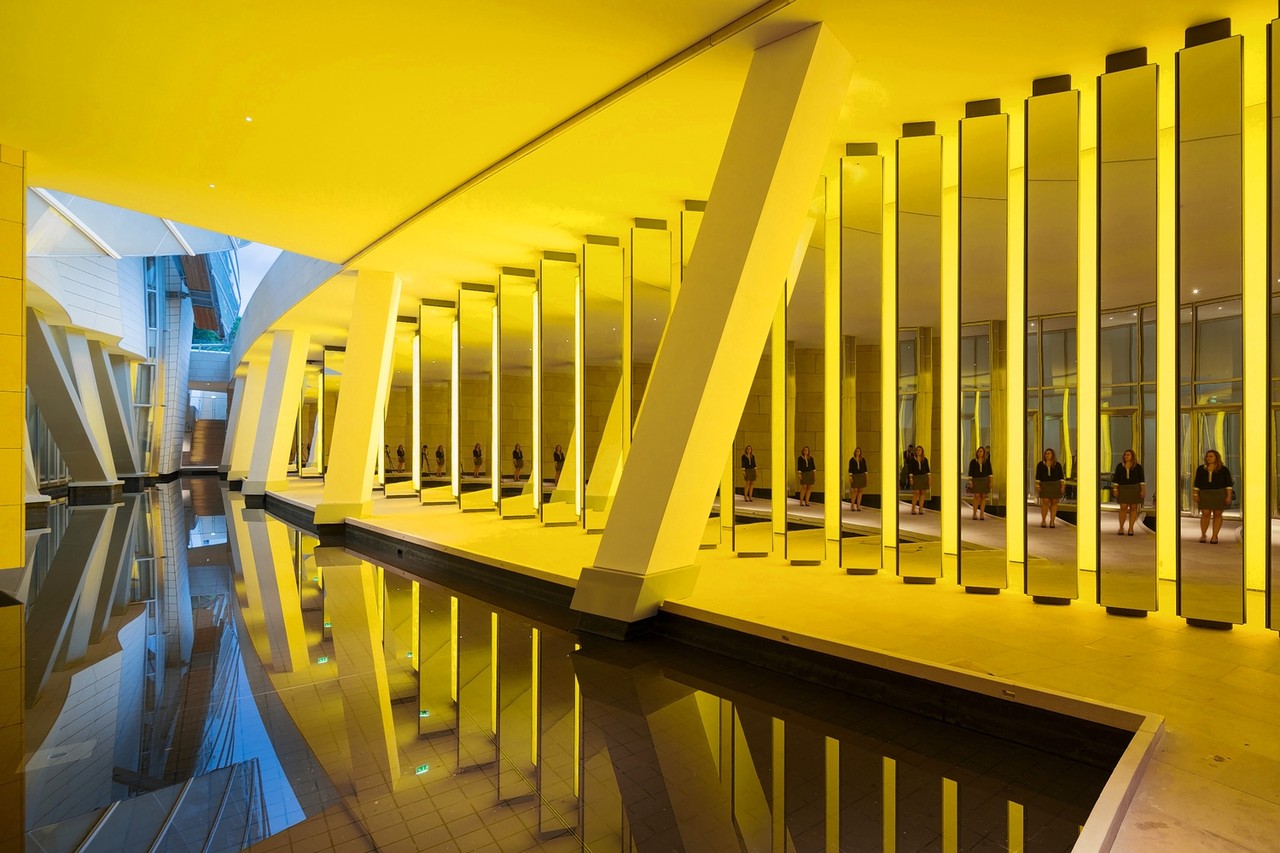 Mr. Arnault is one of the European pioneers of major private philanthropy, which is relatively new to that continent. In addition to his enormous private collection of contemporary art, he has been in the vanguard of European business magnates sponsoring major exhibitions, as well as other philanthropic work including the restoration of parts of Versailles and of Rome’s Trevi Fountain and Spanish Steps. In addition to its own art, the Fondation exhibits works from Mr. Arnault’s private collection, as well as objects on loan.

The galleries range from immense to intimate. Five of Ellsworth Kelly’s paintings are ingeniously displayed in a chapel-like space, unlike the massive rooms in which his paintings are usually found. During its inaugural months, the building itself is featured in several galleries. On view through March 16 is a selection of Mr. Gehry’s early sketches, models, computer renderings and construction blueprints. After first viewing the site, he doodled sketches while flying back to Los Angeles that don’t look like much until you realize that they are remarkably consistent with the finished product. So much for critics who allege that Mr. Gehry’s work emanates mainly from his computer software.

To me the most fascinating exhibit on view at the Fondation’s opening was “A Polite Fiction” (which, unfortunately, has since closed), the work of the American photographer and graphic designer Taryn Simon. Allowed to nose around the site during excavation and construction, she uncovered more than 400 artifacts, many of which were on display, including a newspaper article about the 2013 murder of three Kurdish political activists in Paris, placed in the ceiling of the executive office, and a plastic bottle of urine hidden behind ceramic tile in the administrative restrooms, along with many lewd notes and drawings. She also tracked, occasionally purchased and photographed objects purloined from the site, such as copper and aluminum cables sold to scrap dealers; cement used by a father to build the walls of his daughter’s bedroom; and an oak sapling that a worker took to Poland, planted, and named after his boss. To my knowledge this is the only time an artist became the archaeologist of a massive construction project and then made art of her discoveries, thus magically introducing us to the hard hats who built it.

I was transfixed by “Inside the Horizon,” a permanent installation by the Danish artist Olafur Eliasson of 43 prism-shaped, illuminated yellow columns alternating with mirrors, arrayed along a walkway in the grotto beside a pool, creating kaleidoscopic reflections of the building, water, lights and the viewer’s own image. 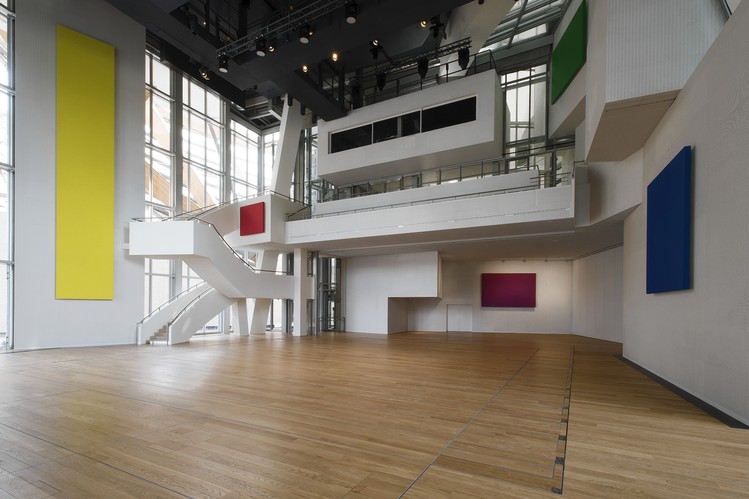 The elegant auditorium contains a permanent Ellsworth Kelly installation of five cheerful colored fabric panels as well as his 12-panel painted canvas stage curtain happily suggesting a contemporary counterpart to the earlier theater work of Picasso, Chagall and other modern artists. When the seats rise out of the floor, the space accommodates 350 people. But when the seats are hidden away, the auditorium can hold as many as 1,000 for music, dance, lectures and Louis Vuitton fashion shows.

Now all the galleries contain art, but when I visited in mid-November, some galleries were empty, leaving no question that in the beginning the Fondation Louis Vuitton was more about the architecture than the art. This left more time and energy to feast on the building and its myriad terraces and gardens, arrayed on a multitude of levels and affording spectacular views of Paris and the Bois. The auditory, visual and spatial assets of the galleries suggest that in time contemporary artists will thrive here. Curator Suzanne Pagé has been in place since 2006. “Suzanne was really a part of the design of the galleries,” Mr. Gehry told me. Her highly regarded 18 years as director of the Musée d’Art Moderne de la Ville de Paris suggest that she will not be unduly daunted by Mr. Arnault, his private art collection or his fortune as she curates extremely contemporary work in this exceptional structure, designed by a man of 85 years, in a children’s playground, on the edge of one of the world’s most ancient capitals.

Mr. Henning writes about the arts and culture for the Journal.